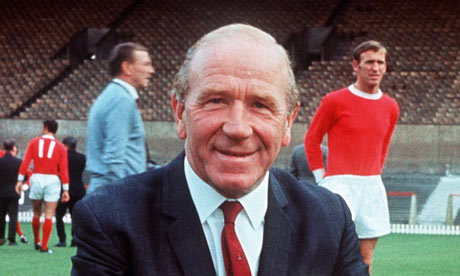 What right do I have to ask this or judge anyone which of course is a fair response. While I don’t think there is black and white answer to this question I do believe that people have the right to judge and there are certain criteria which defines a true fan from a glory hunter. I will try to explain my reasoning.

Many people believe the myth United became the biggest British club because of the Munich disaster. This is false United had become the best supported club after the war because of the great football we played. Prior to the war it could be argued we weren’t even the biggest club in Manchester. It was only after Busby and Murphy took over the club and put the emphasis on attack and style that United’s support started growing.

Prior to Munich in the season 1956/7 United had become the best supported team in the country:

Clearly had Munich been the major driving force for United’s fan base it wouldn’t have dropped off after Munich and been so prominent prior to the horrific event. Moreover a little thought in to the decision making process and we know people will make a decision which football club to support on the basis of their home club or another factor which will attract them to the club. I think first young kids fall in love with the game and then choose a club if it isn’t following the club their father or another import figure in their life supports there must be a reason for someone to relate to that club.

With United it has been the Busby Babes, Best, Charlton, and Law, attacking football and playing football the right way. Leeds and Liverpool dominated football but always felt unfairly treated by the media as they concentrated too much space to United. The reason they did this was because fans loved United’s football philosophy and were drawn to it. The hatred Leeds and Liverpool fans have towards United nowadays is due to the love and respect United achieved playing football the right way even when we weren’t winning trophies!

As a youngster history or sympathy aren’t as important as watching someone do something which you dream about doing and it takes your breath away, you love to feel excited. Why support football if it doesn’t excite you? By the late 1960s United have a London supporters club with over 10,000. With the rebuilding of United after Munich and the return of attacking stylish football, United returned to being the best supported club.

United were in the old 2nd division Average home attendance 48.388.

The essence of United is style and attacking football. And that is why we have become the best supported club in the world. I have no doubt we also have glory hunting fans that support United because the clubs success they associate with their success. But most fans support United because of the football we play and how we play the game.

I don’t think it matters a jot where you come from whether its Manchester, Birmingham, London or Africa I think what is important is that you understand the history and ethos of the club and desire it to continue.

I would hate the special one to become manager, I have no doubt he would win lots of trophies but at what expense? I think often his antics are unacceptable and his brand of football should be kept away from OT. I think the glory hunting United fans would love him but those of us who care and cherish our history would hate it. I also think the reason Arsenal’s fan base has grown so big is again the type of football they play over the last decade I think they have been the most attractive football team to watch in the prem and this hurts me to say. And is also a reason their youth team attendances put United’s to shame.

Football is the beautiful game United’s main objective should be to win trophies being the best exponent of attacking attractive football.

I mention this because I’m proud of United’s history the Busby era of course the fact we stuck by the Doc despite being relegated and watched a return of wingers and attacking football. The fact we got rid of Sexton because of the dour football despite the fact he took us to the highest place in the league for a decade a year before he was sacked.

And that we stuck by Fergie, many other club fans would have made sure he had been pushed way before we won trophies. Fans opinions matter I just hope it is the true fans and not the glory hunters who are heard loudest when Fergie decides to retire!

BTW as a side note this is the best evidence to prove Manchester is Red, not one season since the last war has City had a bigger season attendance than United even when both clubs shared Maine Road. And this was before social mobility, motorways or many people even having cars. How can City fans explain this……simple they cannot!!!

Would you be willing to see United win trophies at the expense of attractive football. If so why do you support United is it just because you like to wind other fans up and support a club which wins a lot?

6 Comments on Are You a Proper United fan?