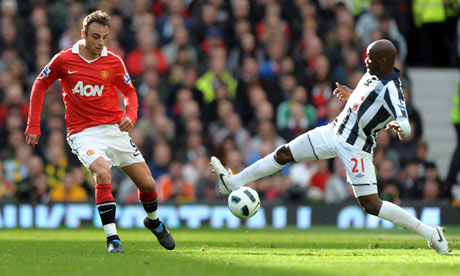 Another dreaded away fixture. Manchester United have only won once in eight Premier League away fixtures this season, but Saturday’s trip to West Brom will provide yet another opportunity to improve that record. United’s poor away form hasn’t prevented them from starting the New Year atop the Premier League table though. However, if United are to claim a record 19th league title their away form will need to improve. Sir Alex Ferguson celebrates his 69th birthday the day before this game, and the least this squad can do is get him a rare three points away from home as a gift.

United have already played West Brom in Premier League this season, and on that occasion the Baggies took a point home from Old Trafford. The Premier League “new boys” are certainly not a team to be underestimated, but then again the same can be said for any team that we visit this season. If United get a win at The Hawthorns on Saturday, hopefully that will bring an end to this miserable voodoo.

While dropped points are always frustrating, it is the nature of all our away draws which is cause for concern. On more than one occasion while away from Old Trafford this season United has conceded a lead late in the game. This was the case Tuesday at St. Andrew’s when Birmingham scored in 89th minute, although there was a missed handball which resulted in the goal. Even if United were to grab an early lead on Saturday, there will be no sense of security until the final whistle is blown. It is absolutely imperative that United make the most of their chances and kill off the game early.

Long-term injury absentees Antonio Valencia and Owen Hargreaves remain unavailable, and Ji-Sung Park is away for a month on international duty in the Asian Cup. Paul Scholes was said to be sidelines until the New Year, and while Saturday would technically be the New Year it is unknown if he will be fit for West Brom. Nani was due to return from injury against Birmingham during the week, but played no part in that game. Hopefully, the Portuguese winger will be available for Saturday. Assuming Nani is fit, I would expect him to start in this match. Darren Fletcher came on as a substitute against Birmingham, and I think he’s likely to start on Saturday. Completing my predicted midfield four is Anderson and Ryan Giggs. Despite conceding late against Birmingham, I’m anticipating an unchanged back four. Edwin van der Sar will likely remain in goal, although Anders Lindegaard will be available for a debut should Van der Sar be rested. Dimitar Berbatov is certainly the in-form striker and should start with Wayne Rooney up front.

Considering our miserable away form, I’m feeling an unwarranted sense of optimism. Sooner or later this terrible away form must come to an end, so why not against West Brom? My prediction is a 2-0 win for United. Rooney has not scored from open play since March, so perhaps it’s a bit bold to think he’ll get a brace in this one, but that’s my prediction.

For those of you who will be suffering from a New Years hangover like I inevitably will be, three points from United may be the perfect medicine.