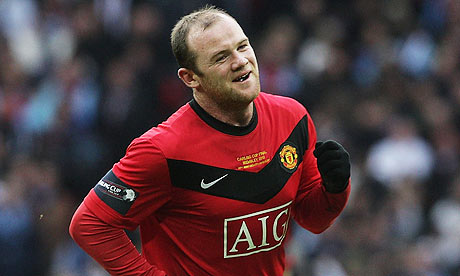 Sir Alex Ferguson steered his Manchester United side into the record books once again as it was the first time in history that the club had ever successfully defended a cup competition – a result that wasn’t without fortune, though, and a result that was secured with a familiar combination.

Antonio Valencia confirmed his rise from Premier League potential to Manchester United star in the making with a man of the match display from the Cup sponsors but it was Wayne Rooney who scored with a header from the Ecuadorians cross to win the game against Aston Villa, fittingly saving his best header of the season for this cup final.

In another re-writing of the domestic games’ history the Red Devils followed up last seasons equalling of league titles with Liverpool with a levelling of domestic and major club trophy hauls – while some may downplay the importance of winning this trophy, it has twice acted as a springboard for further success for Ferguson’s side and this success has indicated that there is a lot of life in this side that was written off after high profile pre-season departures.

Predictably it was done the hard way but admittedly it should have been much harder; Gabby Agbonlahor got goal-side of Nemanja Vidic in the opening stages and the Serbian could barely cope with the strikers pace. After seemingly – almost literally – getting to grips, the big defender felled his foe in the box leaving Phil Dowd no option but to award a penalty. And, according to the rule book, send Vidic off as he was the last man but Dowd – not exactly heralded for his lenience towards the holders given his decisions in the past – not only let Vidic reain on the pitch, but didn’t even book him, leaving to justifiable incredulous disbelief from the Villa faithful. James Milner wasn’t caught cold on the big stage, however, coolly turning his penalty past Tomas Kuszczak to give Villa a 1-0 lead after just 4 minutes.

It was a goal that immediately cast aspersions on Ferguson’s decision to bench the blisteringly in form Rooney (with the official line being a bout of influenza) and caused panic given the impressingly talented list of absentees of United players that included Ferdinand, Hargreaves, Anderson, Nani and Giggs to name just five. But before the United faithful even had choice to voice their displeasure at the selection, on 12 minutes, Richard Dunne provided an intervention, slipping on the ball long enough to invite Dimitar Berbatov in. Berbatov cantered towards goal and almost apologetically, and criminally, let Dunne back in, and while the big Irish defender won the ball, he only succeeded in diverting it into the path of Michael Owen. Owen has been the subject of press speculation recently regarding his World Cup pretensions but he grabbed this chance with both hands to slot home from 18 yards, on what was incredibly his first Wembley Cup Final appearance.

The goal was the sweet part of a bittersweet afternoon for the veteran forward who probably gave watching England boss Capello a full exclosure of his career in a nutshell – coming off after pulling up with what was clearly a hamstring injury when presented with a goalscoring opportunity. Owen was replaced by Rooney on the 40th minute, by which time both sides had only conjured up one notable chance each – Milner was allowed to drift with the ball unchallenged on the 15th minute and once he found himself with a reasonable sight of goal opened fire but Kuzszcak was equal to it, and in the 20th minute, Park and Berbatov worked an opening well with the South Korean failing to trouble Brad Friedel.

Rooney’s introduction gave the opposition defenders an instant new headache, although it was lack of concentration on marking his partner in crime in recent weeks, Valencia, that almost gifted United a half time lead. Valencia skipped past Warnock who slipped unfortunately, and then played the ball to Park 10 yards out. Park shifted feet quite smartly but his shot hit the post, went across goal and was cleared by Cuellar on the line.

After the break, though, United were clearly the team in the ascendancy, even if the open feel of the first period gave way to a more traditional, cagey, final feel. Villa were obviously wary of the threat posed by the Valencia/Rooney combo but it was another Berbatov back heel that almost exposed them in the 49th minute, finding Carrick who moved the ball onto his right and forced a smart stop from Friedel.

The tentative approach from either side was finally blasted away when a patient build up finally broke the deadlock – United were trying to exploit their most potent option, and they managed to do that in the 74th minute when Fletcher made space to turn the latest passing movement into Valencia’s area. The winger played the pass into Berbatov, whose flick was extravagant and functional, and Valencia’s cross was right into the path of Rooney. Admittedly, the recent combination has afforded United’s leading scorer the luxury of just moving into the right space to finish the move, however the cross, though accurate, was lacking in pace and required a demonstration of Rooney’s reported aerial improvement over the last 12 months. That demonstration was duly delivered beyond the flailing hand of Friedel. The frightening combination almost struck again just 4 minutes later, but Rooney’s header hit the post and was moved to safety.

Villa did, in fairness, push to equalise and did hit the woodwork themselves when Stewart Downing’s cross was met by Heskey and deflected by Vidic onto the crossbar, but aside from that and a last minute cross, again from Downing, that was met by Dunne and was unlikely to trouble the keeper, you could sense that the belief was gone through the majority of the second half. Indeed, had United had been more inclined, you had the feeling that they could have extended the advantage. In the end, though, Sir Alex Ferguson’s men had done enough to once again ensure English football history was due another re-write.