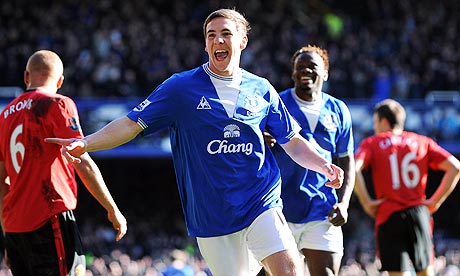 Everton’s future prospects placed a huge stumbling block in the road of Manchester United’s future prospects as substitutes Dan Gosling and Jack Rodwell scored goals to give the Toffees a fully deserved win and leave the reigning Champions’ title aspirations in tatters.

Both managers were restricted from playing their full hand as Everton were missing stars – significantly, Cahill and Fellaini – through injury and the Red Devils had Ferdinand and Nani suspended, Giggs injured, and Anderson, Rafael Scholes and Vidic not in the side through selection. It was David Moyes’ troops who were fully comfortable without their missing complement as they exerted almost complete control through the 90 minutes to take the three points.

United did take a lead through Dimitar Berbatov just after the quarter hour mark, when Antonio Valencia’s crossed was not dealt with by home defenders, and Bulgaria’s record goalscorer thrashed the ball in via the crossbar. It was only a matter of minutes before Everton restored parity through the very capable nimble feet of Bilyaletdinov. The Russian had time to compose himself before unleashing a fabulous, bending shot from around 22 yards that completely outfoxed Edwin van der Sar.

To that point it could be argued that Everton’s goal was somewhat against the run of play; United had enjoyed the majority of possession and nearly restored their lead after Wayne Rooney rounded Howard in the home goal but took a heavy touch, allowing ex-Red Phil Neville to push the ball wide for the corner. That chance, around a quarter of the way through the match, was really United’s last clear cut opening.

The second half was cut and thrust; with Fletcher’s 18 yard effort and Berbatov’s woeful header the only opportunities worth scribing that could have added to the visitors score before the home side struck again. Everton’s endeavour to win was far greater in the second period and their goal when it arrived was no surprise, both through result and source. Landon Donovan did well to expose space left by confusion between Gary Neville and Valencia, Pienaar raced into it, and played a ball across the box which Dan Gosling shinned in. It was just reward for Everton’s performance though you somehow get the feeling it won’t get quite the media screams of “luck” as Scholes’ almost identical goal in midweek got.

Wayne Rooney had been decidedly out of sorts, just like his team-mates, but almost restored parity undeservedly just before stoppage time with a free kick that was an Everton deflection away from the top corner. The home side did manage to secure that a footballing injustice wouldn’t occur when the surely now, soon to be dethroned Champions, rumoured target Jack Rodwell ran at Jonny Evans with the ball. The Northern Irishman rounded off a miserable week for himself by refusing to tackle and Rodwell smartly finished to make the scoreline 3-1, one that didn’t flatter the Toffees at all.

For all the kudos that the Milan result earned Ferguson – from this website, at least – it was obvious that two massive results were vital in the last two away league games for United. With Villa in stuttering form and Everton missing much of their threat in midfield (first choice, anyway), the Champions may look back on the last 10 days as a lost chance in the hunt to win a record 19th league title.