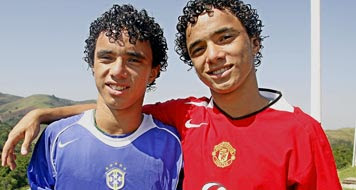 I’m usually quite good when it comes to picking up chants for new players but was actually unaware of the latest Da Silva chant – for both twins.  Rafael has had a great start to his United career and it won’t be long till we see Fabio bombing down the other side – so it’s only right that the two brothers get a chant.

Flipping through my ‘UWS’, discussing the game with my mate in Samuel Platts – I then heard the following:

Will it catch on?  Should there be a more original one?  Also, should I add the chant to our Manchester United chants page?

16 Comments on Da Silva chant….will it catch on?