The witch hunt isn’t out quite just yet for someone to blame at the, shall we say, disappointing recent results. It started with a 2-1 defeat to UEFA Cup winners Zenit St Petersburg in which Paul Scholes got himself sent off for punching the ball into the net. Sandwiched in between that and the horrendous performance away at Liverpool was the comical transfer saga of moody face himself, Dimitar Berbatov. I’ve blogged enough about the Bulgarian forward and think he is an absolute quality footballer – but did we really need to fork out £30Million odd on him? Then we come to the game against Villarreal – the scoreless draw experts against us it would seem – however I wouldn’t quite get your box of tomatoes and rotten fruit yet, I quite enjoyed the game.

Berbatov, so good he is about to control the ball with his nose hair.

Ok it was a disappointing result, but there were a lot of positives out of the game. Firstly, the performance – United passed the ball much better than on Saturday, although were allowed to do a lot easier due to the significant less amount of pressing enforced by the laid back Eastern Spaniards. Yes, the yellow Submarine really was deep and as mentioned in the match report for the game, United missed the guile and creativity of a Scholes or Carrick in terms of creating chances through the middle of the park. Speaking of Park, the Korean was clearly brought down twice in the penalty box, which should have resulted in a penalty on both occasions – however both officials gazed at each other like nervous lovers and immediately waved play on. We can’t always get the correct decisions – but in both these instances they were stone wall penalties. 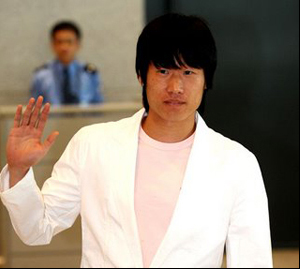 “I swear, on the holy book and this pink shirt, I did not dive”

So, we’re actually in a better position at this point than we were last season – remember the stick we were getting having drawn with Reading and Pompey. Lost to Citeh, unbelievably, and scrapped a 1-0 win over Tottenham with a thunderbolt from Nani. We had five points out of a possible twelve, whereas now we have four points from a possible nine, the only problem is, we have Chelsea on Sunday, who haven’t lost at home for four years. To be honest, it does feel strange that we have had big game after big game so early on the season – especially when it usually takes us some time to get going.

Former United centre half, Gary Pallister, raised concerns this morning on Radio five, stating that this poor run of form would cost United in the long run. Although of course the results will hinder the progress of the club, in the league especially, I don’t know how we can really hit panic stations just yet. I mean we had Tevez missing the opening game, Rooney picking a virus up in Nigeria, Cristiano Ronaldo injured, Nani suspended, Anderson in China, Hargreaves injured, Giggs injured, Scholes suspended, Carrick injured and Berbatov hasn’t played at all this season – thats a big list. Once the team gets settled, players get back to match fitness, I have no doubt United will turn on the style. There is so much ability in this side – and it will shine through, we just need to be patient.

Pallister is concerned with the start made by United.

Chelsea on Sunday will not be an easy game. Firstly, the quality of the Londoners is immense and the side will be high in confidence after their 4-0 victory over French runners-up Bordeaux. Secondly, having been pipped to both trophies last season – they’ll be an extra edge to the game – which will of course be greeted to the tune of ‘Viva John Terry!’. Vidic is out, Carrick is out and it is doubtful that Ronaldo will start. Will Fergie attempt to play all three forwards again in an unbalanced lineup as he did against Liverpool? I hope not, although something will have to give. I hope he will go 4-4-2 with Rooney and Berbatov leading the line, Brown in to replace the suspended Vidic and a midfield quartet of Hargreaves, Anderson, Scholes and Giggs or Nani – which can then shift to a 4-3-3 if need be. Michael Essien is out, which is a big blow to Chelsea, however they have a decent, if a little less mobile, replacement in Jon Obi Mikel and i’m sure Drogba will make an appearance somewhere along the line. Combined with John Terry’s successful appeal, did you ever think there would be any other outcome, Chelsea will put out a very strong line up to try and make the gap even wider at the top come 5pm.
Fergie made a jibe at the age of the Chelsea squad in pre-season, something that seemed to ruffle some feathers in the Chelsea camp. When you look at the two sides – you see two great teams that are very different in style and to be fair to Fergie in terms of age also. We can talk all day long about history and tradition of both clubs – however, in today’s game, Chelsea are a massive force that will want revenge for last season’s events. One thing some fans forget is that there can be a period of domination – but that domination can’t occur every season, year after year – as much as fans want to see their side win, there has to be realistic expectations. Can United win a triple Premier League crown again? Or can United be the first side since AC Milan in 1990 to win back to back European Cups? Both answers are yes of course they can but in order to start playing with the style and grace that we all know is there – the team must get some consistency going. I’ve blogged many times about the difficulty in picking up Rooney, Tevez, Ronaldo and Giggs when they interchange positions so frequently – the process takes time – so yet again we must remember, patience is a virtue my friend.