So Robbie Keane has signed for Liverpool for a £19Million fee that could rise to £20.3Million with regards to appearances – has this blown our opportunity to lure Berbatov to Old Trafford? To be honest, I don’t know – Yolkie raised an issue yesterday morning about both potential transfers and it’s funny that Liverpool’s one comes off first without any trouble.

We’ve blogged before about the talented Bulgarian, but this transfer really has dented our hopes of capturing the front man. This will surely raise his price even more so in the bid to boost our strike force. Levy has, as Fergie did actually say, embarrassed himself over this transfer as those words didn’t come out of the gaffer’s mouth as suggested by his reporting of ther club to the Premier League.  If Levy’s Tottenham lose both Keane and Berbatov they will be left with out of sorts Darren Bent to man the front line on his own – something I can’t see Ramos doing.  With only 18 days till the start of the 08/09 campaign things will have to move pretty quickly.  The irony is that 12 months ago Spurs’ front line was the pride of the Premier League apparently – four great strikers in Keane, Berbatov, Defoe and Bent that would push the club above Arsenal.

Carlos Tevez, every defenders nightmare with his low centre of gravity, exquisite movement and his relentless closing down makes him a fans favourite.  Over the past five seasons, United have been linked to a whole host of strikers including Torres, Huntelaar, Agüero and Benzema to name a few.  Tevez was also one of those players, a man who wore the United strip three years before kicking a ball for the club in a press conference for Corinthians .  Few fans would argue against the work rate of the little Argentine and also his intelligent movement that complements Wayne Rooney so well.  I guess we all forgot that he is still owned by Kia Joorabchian and will now command a £32Million fee making him the most expensive player to play in England.  I agree with the Premier League regarding third party ownerships and I don’t like the way in which he was brought to England but this process in a common day occurrence in South America and also a bit closer to home in Russia.   So our transfer spending could rise to £63Million by the end of August if the captures of Berbatov and Tevez are complete.  I’d be more happy if the Tevez deal was finalised over the Berbatov deal due to the amount of important goals Tevez scored last year – that in my memory was only ever replicated by Eric Cantona (sure Ronaldo scored 42 goals but Tevez’s late goal were a reminder to the goals that Eric scored in that 95/96 season).  Tevez scored past Lyon to make it 1-1, against Liverpool in a 1-0 win, against Spurs to capture a point and against Blackburn again to save a point.  Fergie has also commented on his knack of scoring vital goals and I believe this would be £32Million well spent.

So, Jovan Kirovski, some of you may be anticipating a new Manucho signing that could go on to play a key role in the forthcoming season – you’d be wrong.  Jovan Kirovski is a 32 year old American currently playing alongside Darren Huckerby in the MLS for San Jose Earthquakes and a former youth team player of Manchester United.  I end up doing this quite often when I have to research players (was research Huckerby – for my job i’ll have you know) and then coming across ex-reds or ex-United youth team players, I did the same the other day for Alex Notman (scored in the Munich memorial game in August 1998).  Does anyone even remember Kirovski?  He had work permit issues and then went onto Dortmund to become the first American to score in the Champions League and then win it.  That was probably the highlight of his stop start career but much more than some players could ever do.  Anyhow, just wanted to see if you’ve come across any former Reds, be it youth team, ressies or first team – that you were surprised to see?  I heard Ben Thorley is now driving a taxi?

I thought, in my teenage years, that Jovan Kirovski could go on to partner Eric up top and become a European class striker after his successful stint in the reserves – sadly in my naive years that didn’t materialise and we bought Ole instead, every cloud. 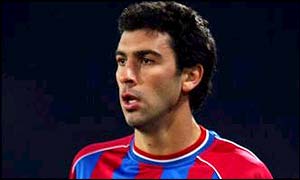