With the inevitable sale of Louis Saha to whoever has good medical insurance the questions is asked as to who will inherit the number 9 shirt? Many people, including the footballing expert Mr Don Goodman, stated that “Rooney and Tevez are too similar to play together” and United are missing an ‘Old fashioned centre forward’ to ‘mix it up’. At the time I thought this was utter rubbish being stated and I still do. Firstly, Berbatov isn’t a player that you would describe as an ‘old fashioned’ centre forward. He has quite possibly the best touch in the Premiership, can hold the ball up and bring the midfield into play. The only reason people believe he can offer a different option is simply because of the size of the man rather than what he can offer with his superb talent. He is a scorer of one of my personal favourite Champions League goals of all time against Roma for Bayer Leverkusen:

So would Berbatov be a good signing for Manchester United next season? For £20Million, as some reports are suggesting, I think he would be a good signing and will allow both Tevez and Rooney to deploy deeper roles if playing in the Premier League, and when the inevitable move from Ronaldo to Madrid happens. Spurs are apparently holding out for £30Million for the player – which I think is too much. His goal scoring record is good but not outstanding by any means. I would much prefer Fergie to chase after Karim Benzema from Lyon (although Lyon are also asking for an astronomical fee of £48Million). Benzema, for me, was one of the best performers against United last season and would offer us a different option if required. Fast, strong, makes intelligent runs and is very similar to Ronaldo (Brazilian one) in his hayday. Benzema, at 20, has the world at his feet and Old Trafford would be a superb place for him to show this.

Yolkie also mentioned that United are watching Sergio Aguero of Atletico Madrid, a player that I think can become one of the best in the world, which is backed up by Spanish football expert Guillem Balague. He comments on the fact that Aguero will be one of the top three forward in the world in three years time – although he believes that Atletico Madrid is the best place for him at present. I disagree with that as I think he has the ability, character and temperament to play in the Premier League and would be a perfect replacement for Cristiano Ronaldo. One other thing to add, I don’t understand how many new Maradona’s there are going to be? Messi, Tevez, Aimar, Saviola, D’Alessandro, Ortega, Latorre (Old school) and Marinelli (was at Boro). Have I missed any out? So anyone that is small and Argentinian is apparently the new Maradona. Have a look at some of these Aguero goals from his Argentina days:

So, that big signing that we’re all eagerly anticipating, should hopefully be reaching it’s climax as we’re nearly a month away from the season. If I could pick the striker that I would most want at United it would Benzema, followed by Aguero (Don Goodman would have field day if he played up top with Rooney and Tevez) and then Berbatov. I don’t dislike Berbatov as a player, but I think the other two would really benefit United when we operate with such a versatile forward line. Benzema would terrorise Premier League defenses and I just hope that we get him before Chelsea do, or for that matter Real Madrid.

So who would you sign out of the three of them and why? 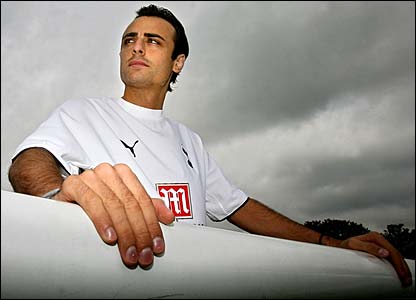 13 Comments on Dimitar Berbatov – Really the next number 9?