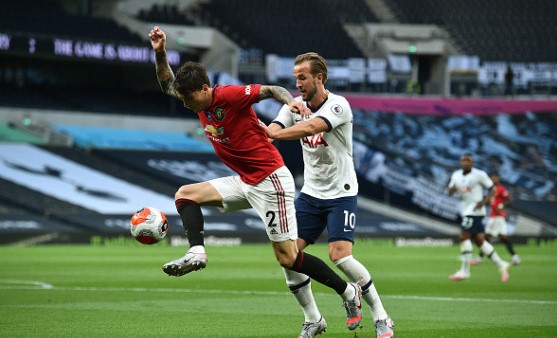 Manchester United have been humiliated. The match at Old Trafford will be the one to forget as soon as possible, as tough as that might be, because Tottenham Hotspur have ran a riot and defeated Manchester United 6-1. It is a tough blow for everyone at Man United, as Jose Mourinho got his revenge on the team that sacked him less than two years ago. It was a horrific afternoon at Old Trafford, despite the hosts getting an early lead after just two minutes of play.

Five minutes later, it was already 2-1 for Spurs, with Ndombele and Son making quick replies and then Anthony Martial’s straight red card made things terrible for United. Kane, Son, Aurier and then Kane again scored to make this a miserable Sunday for the Red Devils.

Solskjaer Is Not The Man For The Job

We have been saying this for a while and now this start of the 2020-21 season has given us another confirmation – Ole Gunnar Solskajer is not the right man for the job of being the Manchester United manager. His team is declining and regressing and his tactical and coaching acumen has been proven to be truly uninspiring. The fact that ‘Solskjaer gets the club’ is just an empty phrase that has no meaning in modern football and on the pitch, his team have been looking dreadful in every single Premier League match.

Defending issues was probably the only thing last season you would not have to mention, because things were going well in that department. There were problems in structural attacking play, midfielders and forwards had their bad spells, but defence was quite good. But now this season it looks completely the opposite. Against Spurs, on several occasions, the back four looked as if they were playing together for the first time – and even worse than that. Luke Shaw was getting caught out way too often, while Maguire and Bailly both had a day to forget.

Transfers Are Not The Be-All Solution

Man United should improve this squad on the market. There is so much that needs to be done and which will not be all solved on this Deadline Day. The fans are right when they want better players in this team. But that is not the ultimate solution. No matter how good the transfers might be, if the coach is not the right fit and is simply not up to the task, then that means nothing. Of course, sacking Solskjaer would also not be the final solution, since there are many bad decisions being made by those who lead the club and make the most important moves. There is not one solution to this huge problem.

Kane And Son Are A Deadly Duo

We had seen them combine together for five goals against Southampton, when Heung Min Son scored four, each of them assisted by Harry Kane, before the South Korean returned the favour for the fifth goal of the match. At Old Trafford, they both used the space they were given and they really showed they are becoming a deadly duo. Kane assisted Son’s first goal of the day, before Son did the reverse after 30 minutes of play, to make it 3-1 for Spurs.

They each scored another goal afterwards, with Kane setting the final score from the penalty spot.