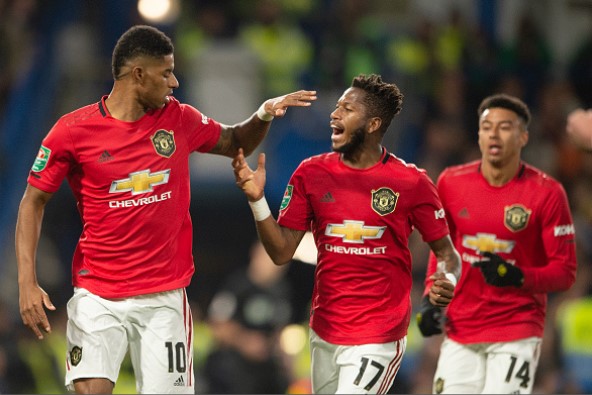 Matches are coming thick and fast. The game against Tottenham Hotspur has just passed and already on Saturday, Manchester United are set to play Manchester City in a derby that could bring a lot to Ole Gunnar Solskjaer’s side.

However, we are still not done talking about that match against Spurs. We are analyzing things as much as when United lose and it is easy to blame everyone, so now we will be focusing as much on this 2-1 win against Jose Mourinho’s side.

We already spoke about the four things we learned from the match, here are some of things we noticed after taking a closer look.

It was quite obvious just by watching the game that Marcus Rashford was up for it and his performance in the end showed that perfectly. He scored two goals which was enough for his team to win, but what was also obvious was the eagerness to be in the centre of it all.

Rashford attempted 11 dribbles against Spurs, an extraordinary number. Although he did complete just five of them, that is still an amazing number. In fact, Jose Mourinho spoke after the match that he was right when he was saying Rashford is the best on the left flank and that is exactly where those completed dribbles came, at the corner of the opposition’s box.

Watching Rashford in such form is a pure joy.

We spoke yesterday that this was one of the, if not the best, performance Fred has had since joining from Shakhtar in 2018. And whilst his energy and willingness to press were all fine, there were some negatives to it all. It was incredible to see that the Brazilian had attempted eight tackles in this match.

But it was even crazier when it turned out that he only completed two tackles, getting dribbled past on the other six occasions. In fact, three of those six occasions were just in front of Spurs’ box, when he was left behind.

Lingard Creates Four Chances… Or Does He?

And then, we need to talk about the fact that stats can also be misleading. According to Opta data, Jesse Lingard created four chances for Manchester United against Spurs, but a closer look into where those ‘chances’ occurred shows us a different perspective.

The thing is that ‘chances created’ or ‘key passes’ are simply terms explaining who assisted the shot. That is important when three of Lingard’s four key passes were noted because three times Man United were shooting from distance after his passes. Those were not really chances, although that one for Mason Greenwood midway through the first half truly was one.

Dele Alli Is Back

To wrap things up, we cannot not see that Dele Alli is getting back to his old self. He scored four and assisted one in the first four matches under Mourinho, the old specialist for the ‘number 10s’. Dele Alli scored a goal so typical for him and very soon he might be a real pest once again.