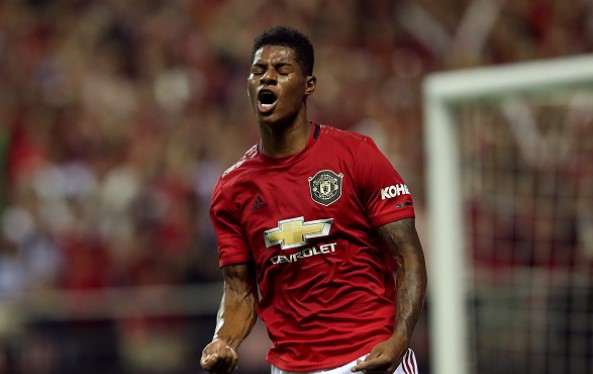 What a night it was at Old Trafford. Manchester United have beaten Tottenham Hotspur 2-1 on Jose Mourinho’s return to where he was 12 months ago, with Marcus Rashford denying his Spurs anything from this match, with a brace, whilst it was Dele Alli’s goal that was in between the two.

The Devils got a really important victory, that puts them in a much better mood ahead of the crucial part of the season.

This has been the story after so many big matches Man United have played in recent years and that has been confirmed on Wednesday night again. It is simple as that – Marcus Rashford loves these matches and he tends to shine brightly against the fellow clubs from the big six.

He scored the brace whilst also earning that penalty he materialized cooly and showed that he is incredibly important for Man United. His goals+assists tally puts him in fourth place in the Premier League this season, which is a remarkable achievement for a 22-year-old playing in a team with so many squad issues and imbalances.

Fred With A Strong Performance

Ever since Fred arrived from Shakhtar Donetsk in the summer of 2018 for a fee of around 50 million pounds, it was always the case of looking when he was going to show why he joined. And then, in the 18 months that ensued, the Brazilian had only glimpses of strong performances, mostly the halves of games when he did quite well.

Against Tottenham, he finally made Man United fans scream with joy to finally see all of his arsenal (pun intended), his energy levels were very high and alongside Scott McTominay he looks much better than when he is paired with Andreas Pereira.

This was yet again the chance to see that this particular Man United team prefers meeting against better sides, who are more proactive and eager to play expansive football. The two wins over Chelsea prove that, but also the fact the Devils are still the only team in the league not to lose against Liverpool.

Now, against Spurs, they showed a really strong outing when they had the chance to sit back a little, wait for their opportunities for swift moves and attacking the Spurs full-backs, clearly their weakest links. It is when Man United start winning regularly against teams like Bournemouth and Sheffield United that they will have the real chance to do anything of more importance in this league.

Is This Actually A New Jose Mourinho?

Jose Mourinho he is the new Jose Mourinho when he was announced as the Tottenham Hotspur manager and in some way, that has been the case in his four matches at Spurs. His team tried to be attacking minded at Old Trafford and they conceded two goals in each of those four games, which is quite unusual of Mourinho’s teams.

Maybe he is changed after all, but maybe this is another trick of his, trying to prove a point before changing things.