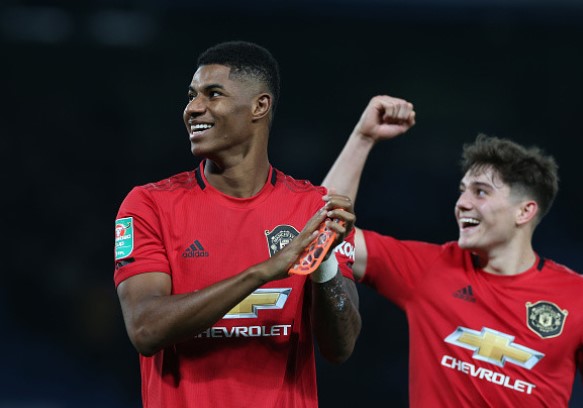 Manchester United’s latest 3-0 victory over Partizan Belgrade meant that the Red Devils have qualified for the knockout stages. In February, they will be playing in Europa League round of 32, as they keep their chances of potentially winning the second Europa League trophy in three years.

The victory against the Serbian side was a very positive one. We spoke about the things we learned after the game, but this time we took a deeper dive into the numbers behind this game and these are the things we found interesting.

Usually when we talk about expected goals, it is in a negative context, at least that has been the case since the start of the season. But this time we are only able to praise the side for their performance and the way they limited the chances Partizan had had.

The expected goals for Man United amounted to 2.89, but it is staggering that Partizan’s had the value of just 0.06. That is not a surprise when you know Partizan had two shots in the entire match and both of those came from distance. This is what we call a comfortable victory.

Several Man United players had a really good game, but it was Marcus Rashford and Juan Mata who stood out for their performance with the ball, as both of them tormented Partizan defenders with their dribbling and ball progression skills.

The two of them attempted a total of 15 dribbles, getting past their opponents 10 times. That is a really good ratio of successful dribbles and Rashford and Mata really gave a hard time to Partizan. Almost all of these dribbles happened in the central areas of Partizan’s half, which is also a good selection of where to dribble.

Partizan were poor on the night, which we can definitely say as we have seen them in Belgrade play much better. However, there is one player we can talk about tonight – Aleksandar Scekic. The defensive midfielder did not really do amazing things, but it was interesting to see how much he was trying to get the ball off his rivals. He made 11 tackles and got the ball seven times, whilst also adding two interceptions.

He was really trying to get his team going by diligent defensive work, but it was obvious Man United were too strong both for him and his teammates.

Wan-Bissaka Gets The Crosses In

And then there is Aaron Wan-Bissaka. We spoke last night about his performance and how he offered a different facet of his game and also compared him to a very different display from Ashley Young. One fact that confirms a lot of what we were talking about him is the number of crosses he took.

It was four, but all four of them were close to Partizan’s penalty area and not from deep. His crossing can still improve and especially his understanding of when to push further forwards, but this was a nice blueprint for the England international ahead of the new challenges in the Premier League.