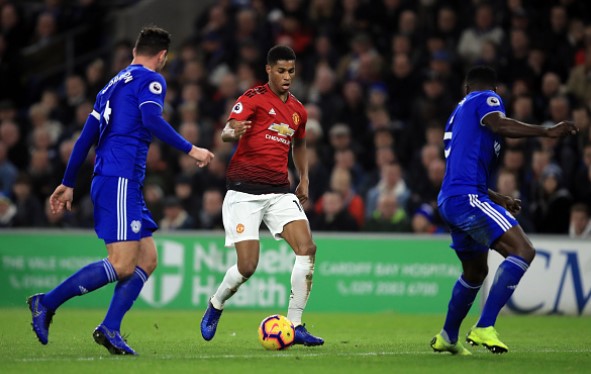 Manchester United are back on a winning path, as they beat Leicester City 1-0 at Old Trafford on Saturday afternoon. Marcus Rashford scored the only goal of the match from the penalty spot, just eight minutes into the match. His opener proved to be decisive, as Man United endured to secure only their second Premier League victory of the campaign.

It was a match without many chances and it is good to see United this time came out on top. They now have eight points and are just two points behind city rivals from Manchester, after their loss against Norwich City.

Maguire Does Well Against Former Club

There was a lot of talk about Harry Maguire prior to the match, quite expectedly, as he was set to meet his former teammates for the first time since joining Manchester United this summer. And he did well to help Man United secure a clean-sheet.

He managed to neutralize Jamie Vardy, whose pace was always going to be dangerous for the big centre-back, but his experience and positioning, as well as the fact he knows forward quite well also helped him. He won five aerial duels and made six clearances, to ease off the pressure.

Leicester Will Regret This Loss

Manchester United got all the points, but Leicester will feel like they could have done more. In a match where so little good chances occur, they will be unhappy that they did not at least remain unbeaten. James Maddison had their best chance early on while it was still 0-0 and that will be on their minds.

However, even the fact that they lost will not be as tragic for them. For such a young team, it would be a good indicator that they are unhappy with this result, that they feel they could have done more. They already drew against Chelsea and their appetites have grown since the start of 2019. That can be also valuable for them, although it does not count for the Premier League standings.

Fred Could Get More Chances Now

It was good to see Fred in the matchday squad for the first time this season. After his not-so-great pre-season, where he lost a big chunk of it due to getting married, Fred did not feature in any of the four matchday squads before the first international break. But against Leicester he came on midway through the second half, to remind everyone that he is still there and that he wants to show his qualities.

Whilst we might still need to wait a bit longer until he showcases them, it is good to know that there will be games for him to bring his match fitness up and also get some confidence. First there will be a match against Astana and the League Cup is not that far away either.

And the last but not the least. Man United won but we should not overlook the fact that the team once again had troubles creating chances. The midfield is obviously lacking in that area and Ole Gunnar Solskjaer will have to assess that.