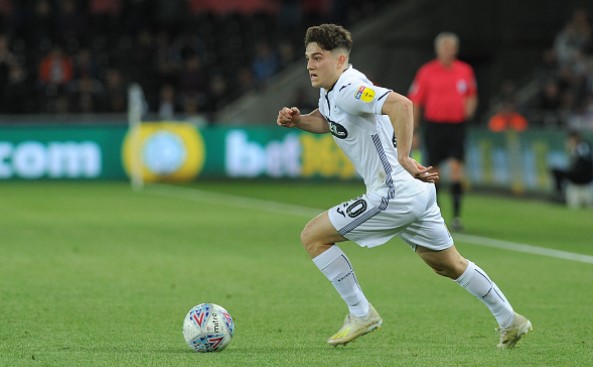 Daniel James was officially announced as the new Manchester United player and after his presentation, he spoke about himself and his qualities, Ryan Giggs and Wales national team, but also his expectations for the future.

For me, it’s surreal, really. I think every kid grows up wanting to play for Manchester United. I never thought I’d be able to play against them, never mind play for them, so it’s surreal, and I’m really looking forward to it. I can’t wait to get started. I’d say I’m quite a direct player. I don’t just like to get the ball into feet and dribble at players; I like to get the ball in behind. I’m quite a pacy player”, Wales international said and continued.

“I think being versatile is important, especially in this day and age. For a lot of players, it’s important that you can play different positions, I think, this year, I’ve played left, I’ve played right, I’ve played up top, and I’ve enjoyed all three of them.”

He also had some nice words for Man United legend Ryan Giggs and the challenges ahead.

“I want to be a big part of putting United back to where they want to be. We’ve got a massive fanbase here, and to be part of that is amazing. Playing in the Premier League is going to be a big test for me, and it’s one I think I’m ready for.”

You remember all those talks of Romelu Lukaku being potentially interested for a move to Italy. First it was his agent that talked about it and now Lukaku himself has said some big words about his potential move away from Manchester United. It could be the case that nothing will come out of this, but it looks like the Belgian is eager for a move.

“Well, Conte has gone to Inter, for me he is the best coach in the world,” the Belgium international told Sportmediaset. “With regards to my future, I have already made a decision that I still cannot reveal publicly, out of respect to Manchester United with whom I still have a contract.”

“I am a big Serie A fan, those close to me know that I have always wanted to play in the English league and in the Italian: I love Italy,” he added. “And then Cristiano Ronaldo arrived, [Maurizio] Sarri is going to Juventus, [Carlo] Ancelotti will be at Napoli: Serie A will be exciting.

“My club and agent will talk about [the transfer bid], but my mind is made up. I have a contract with Manchester United, it is up to them to decide. I will speak to the club and my agent to make the best decision. In any case, I am sure that it will be a very busy summer”, Lukaku said.

We cannot wait to see how this one unfolds.