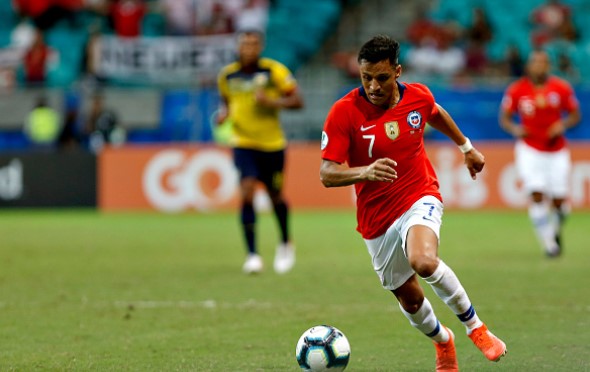 Alexis Sanchez keeps enjoying his time in Brazil at Copa America, despite his Chile lost the last match in Group C at the hands of Uruguay. Chile lost 1-0, but still comfortably qualified for the quarterfinals and Sanchez had a good game against two-time world champions.

He did not get to help his team avoid the loss, but his performance reminded of his old self. With several nice runs and a couple of dangerous shots, he was vibrant, making experienced Uruguayan defence work hard. Chile will meet Colombia in quarterfinals.

Gary Neville spoke about Man United’s business on the market and how much of a struggle it is to do the job there these days. He mentioned that the club is in a tough situation and that because of that, it is much tougher for Devils to sign players they want to how it used to be several years ago.

“It’s difficult to do business. Everyone knows United want players and price tags will go up. You’ve got to try encourage players to come to the club. Players don’t just jump to sign for any club, they do their homework and get their agents to get to work”, Neville said.

“They probably have 50 meetings before they sign for a club nowadays. United will be in the pit with the rest of the sharks looking for the big signings. It’s difficult for all clubs they all want the same players.United have got a big job to do in order to get a squad right for a championship challenge. Hopefully that’ll start this summer but it’s not just bringing players in, it’s about getting some out.”

Neville also spoke about how much would Man United miss Paul Pogba if he was to leave the club and Neville had a clear point to make in that conversation.

“They don’t have to keep any player. United are a better team when Paul Pogba plays but if players don’t want to be at the club, that doesn’t mean Pogba, he may want to be at the club, you have to get everybody onside and aligned with where you’re going. Ultimately, that’s the first thing Ole had to do – to work out who was going to be ready for the club moving forward. I’m still unsure on many players”, Neville advised his former teammate.

Fabrizio Romano has some important news from Italy for all of us. He wrote on his twitter profile that Lukaku’s agent Federico Pastorello had a meeting today with Inter Milan’s sporting director.

“Lukaku is a dream and is not easy to realize it… but yes, Inter are trying to get uom. Romelu has expressed his wishes (to leave Man United)”, Pastorello said.

This is just another development about the potential deal between Man United, Inter and Lukaku. The Italians want him, but they are expected to have a hard time convincing the Devils to let the player go for less than what they are asking at this point. Inter are not in a position to go for a heavy spending spree, either.