Victor Lindelof has been one of the most polarizing players for Manchester United since he joined the team before the 2017/18 season. Often criticised but sometimes praised, the jury is still out on whether the Sweden international has what it takes to play for The Red Devils on a long-term basis.

The reality is that Manchester United have struggled to find a consistent centre-back pairing of late. In fact, this has been a major issue since the retirement of both Nemanja Vidic and Rio Ferdinand. Chris Smalling and Phil Jones are not what we thought they would become; they merely look like average Premier League centre-backs right now. Eric Bailly has seen a steady decline since his arrival at Old Trafford as well. And with no other true centre-back on the squad, this is Lindelof’s chance to become a permanent name on the team’s sheet week in and week out.

The Swede has been starting on a regular basis, though, featuring from the start in 10 matches and tallying 809 minutes thus far. That’s quite an improvement following a first season where he struggled to get playing time. But “being there” is not enough. The real question is whether Lindelöf has played better than last year.

Honestly, it is hard to judge against the numbers here. He only missed the matches against Valencia, Newcastle United and Derby County; when he has been out there, United have a W4, D2, L4 record. In a way, he hasn’t been a game-changer nor he has been able to escape the team’s inconsistencies. But if we take a look at his rating (based on WhoScored.com) we can see he posted a 6.66 rating in the Premier League in the 2017/18, compared to 6.47 this term, albeit in half the games. His numbers are better on the Champions League, though, going from 6.98 to 7.00.

To put things into perspective: Lindelöf’s 6.66 rating has him as the second-best centre-back on the squad right now. He ranks behind Smalling’s 6.89, but well ahead of both Bailly (6.13) and Jones (6.08). These two, in fact, grade out as two of the team’s three worst players numbers-wise.

One positive aspect is that Lindelof is only 24 years old. He has enough time to improve and become an even better player. He shouldn’t be one of the starting centre-backs on a team with championship aspirations, but right now he has earned that right on the pitch. The Swede might not be flashy and might never be Ferdinand’s second coming. But Lindelöf has looked decent this season, and has responded time and time again. That’s all you could have asked of him following his disastrous first season with the club. 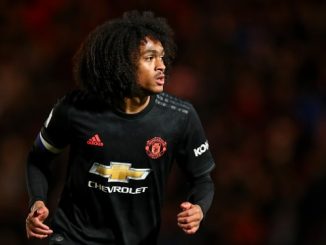 Manchester United U21 Will Discover EFL Trophy Rivals On Saturday