This Saturday we will live another chapter in this heated rivalry. That’s why now it’s time to remember some of the greatest Manchester Derbies in recent history.

No football will forget about this game. But unfortunately, this game wasn’t remembered for its football. Instead, this game marked the end of a four-year feur between United’s captain, Roy Keane, and Manchester City’s defender Alf-Inge Haaland.

By now, everyone knows the story. Haaland accused Keane of simulating a torn ACL injury back in September 1997, but the Ireland icon had his revenge. It arrived almost four years later (April 2011) when Keane destroyed the Norwegian’s knee with a vicious high tackle that prevented Haaland from being the same ever again. Keane admitted in his own autiobiography that he’d “waited long enough… I f***ing hit him hard. Take that you c***.” It was clear this was no accident.

Oh, and that game ended 1-1. But no one really remembers that.

Manchester United and Manchester City met four times during the 2009-10 season. But the first of those games was undoubtedly the best one. In fact, some even consider this game to be the greatest Manchester Derby ever. On one hand there was Rooney’s United, and in the other one there was a City side that had splashed over £100 million on new talent over the summer. Their new players including Emmanuel Adebayor, Joleon Lescott and £25m former United man Carlos Tevez. However, this was a battle money couldn’t win.

This was the textbook definition of a back-and-forth game. In fact, United took the lead three times, but City answered time and time again. The Red Devils would net a late winning goal on stoppage time that gave this game the label of instant classic.

Rooney scored the opener for United, but Gareth Barry equalised. Darren Fletcher would net two goals, but Craig Bellamy answered with two of his own – including what ended being the 3-3 equaliser in the 90th minute following a huge mistake from Rio Ferdinand.

It seemed this was game set to end with a 3-3 draw, but United had other plans. Ryan Giggs placed a lovely through ball towards Michael Owen, and the former Newcastle idol found the back of the net in the 96th minute. An absolute thriller, indeed.

This game happened roughly seven months following City’s stunning 2011-12 title campign. But Sir Alex Ferguson wanted revenge in this mid-season clash. The context is quite important here, as United were at the top of the standings while City were a close second. United quickly took advantage of City’s slugish start, and a double from Wayne Rooney lifted United to a 2-0 advantage before the 30th minute mark.

City didn’t give up, though. They equalised thanks to Yaya Toure and Pablo Zabaleta, and it seemed the reigning champions could steal a draw from this one. But United did not wanted to return home with anything less than three points, and Robin van Persie came through on the clutch to give United a huge win. His deep free-kick buried into the bottom corner, and the goal sent United players into raptures.

This game was also remember for the situation involving Rio Ferdinand. The former England defender got hit by a coin and a pitch invader sneaked into the pitch targeting him, but Joe Hart protected his Three Lions teammate. Without a doubt, this was a game no United fan will forget since the team ended winning the Premier League title in domiant fashion. 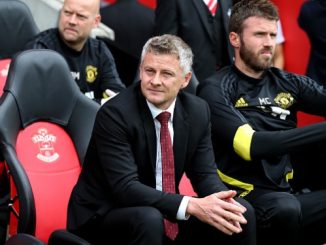