Manchester United secured a 2-1 win against CSKA Moscow that clinched them the top spot in Group A of the 2017-18 UEFA Champions League. Here is our detailed one-on-one analysis for The Red Devils’ performance against the Russian outfit:

Sergio Romero got a second consecutive start in the Champions League after playing two weeks ago against FC Basel. And even though he failed to keep a clean sheet for the second straight time, this time United got the win thanks to two second-half goals. Romero couldn’t do anything on CSKA’s goal scored by Vitinho, though. His performance was solid, but it’s clear De Gea is the better option for the team right now. Romero, though, represents a solid alternative as a backup.

Lindelöf has been settling nicely as a centre-back of late, and the Swedish international once again showed why he has been playing more regularly of late. The former Benfica star played on the right side of the defence, and looked timely on his interceptions while clearing the ball every time he had the chance. He keeps getting better and better after each game, further proving he is getting more comfortable to England as weeks advance.

Smalling didn’t really have a bad game. However, he was the worst player out there for Manchester United. The lack of regular playing time could be affecting him, but the fact is that he didn’t look comfortable on a three-man defensive line. Considering the form of Marcos Rojo, and the way both Lindelöf and Blind played in this game, Smalling keeps falling down the pecking order for Jose Mourinho. That’s not a good sign for a player who was a regular for the England national team not long ago.

One of Daley Blind’s biggest strengths is his versatility. And the Dutch defender once again showed it in this game. He lined up as a centre-back on the left side, and delivered a great performance all around. He registered eight tackles, four interceptions, and three clearances. And also delivered one key pass and five crosses. He made his presence felt on both ends of the pitch, perhaps trying to show Mourinho he still has a future at United despite all the transfer speculation around him.

Valencia is a player that often slips under the radar since he is not flashy nor he doesn’t score/assist with regularity. But there’s no question he has been one of the most consistent right backs in Europe this season, and he showed it once again with another stellar display against CSKA. He defended quite well, pushed forward when he had the chance, and looked accurate on his touches. His numbers do not lie. Valencia had a 88% of passing accuracy, registered one shot, one shot, four crosses, three dribbles, and six long passes. He filled the stat sheet nicely.

Pogba pulled the strings of the team in midfield, and delivered a great assist on a cross to Romelu Lukaku that equalised the game midway into the second half. The French playmaker moved all over the pitch, although he made most of his damage on the left side of the pitch and acted as a threatening playmaker when given enough space. If anything, this game showed how much he will be missed against Manchester City.

Ander Herrera got a rare start due to the absences of Marouane Fellaini, Nemanja Matic and Michael Carrick due to injury, although the Serbian probably just received rest ahead of the Manchester derby this weekend. The Spaniard looked composed on the ball and accurate on his passing, as evidenced by his 86% of passing accuracy. But he left the pitch midway into the second half to make way for Scott McTominay. If Fellaini can’t recover, then Herrera would likely start in place of Pogba against Manchester City.

The presence of Shaw in the starting XI was the biggest surprise in this game, but the former Southampton left-back was up to the task. Even though some might blame him for losing the marking on the sequence that led to CSKA Moscow’s goal, the defender bounced back and produced a strong showing on both ends of the pitch. He was particularly effective going forward, and showed he hasn’t forgotten how to play. Maybe this performance will allow him to stay at the club past the January transfer window?

Mata did’t attempt a single shot on target in this game, but he didn’t need that to make a big impact on the game. The Spanish playmaker looked lively on the ball, and created several scoring chances for the team playing in a sort of free role as a number 10. His best moment came in the 66th minute, however, when he lobbed a ball for Marcus Rashford, and the talented youngster drilled the ball past Akinfeev. It was a strong display from Mata, who once again evidenced how comfortable he looks on a free role behind the strikers.

Lukaku has not been very good of late and is in the midst of a scoring slump, but the Belgian striker appeared when the team needed him the most in this game. Lukaku took advantage of a great pass from Pogba, and placed the ball past Akinfeev from close range. It was Lukaku’s fourth goal in the Champions League this season, and him scoring is a great sign going forward. Especially considering the Derby against Manchester City will be in only a few more days.

Rashford’s growth has been a worldwide story this year, and his finishing has been much improved from the one he showed earlier this year when he spent almost 20 Premier League games without scoring. Earning more playing time has been huge for his development, and right now it seems he has earned the right to be a first-option on the attack alongside Lukaku. His pace and ability to play all over the attacking third were on full display once again.

Neither of the substitutes made much of an impact. Youngster Scott McTominay came off the bench to gain some much-needed European experience and added fresh legs in midfield. Meanwhile, Anthony Martial didn’t register many touches and Axel Tuanzebe added some fresh legs on the defensive end looking to close the game out. 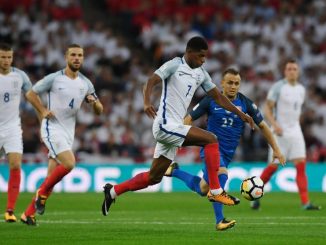