Couldn’t watch the game against Arsenal? Don’t worry. Here is a detailed one-on-one analysis of each player in Manchester United’s huge 3-1 win over The Gunners at Emirates Stadium on Saturday afternoon.

The Spanish goalkeeper was an absolute wall for The Red Devils in this game. Arsenal played with an attacking approach all game long and constantly tested De Gea. But the former Atletico Madrid star responded time and time again. He recorded an astonishing tally of 14 saves, and he was one of the main reasons why United stole three points from the Emirates Stadium. Jose Mourinho did not doubt after the game, and called De Gea “the best keeper in the world.” At the very least, he should get consideration for that label following this massive performance.

Out of the three defenders, the Swedish centre-back was the one who had the better performance. The injuries sustained by Phil Jones and Eric Bailly have allowed Lindelöf to gain more playing time, and he is making the most of it. Looked composed on the ball and won several individual duels despite the fact he had to face faster players such as Alexis Sanchez and Alexandre Lacazette.

Rojo is not 100% fit yet when it comes to his match fitness, and it showed. But the Argentinian defender does not give away an inch of space, and looked surprisingly comfortable as a centre-back even though he has been a left-back through most of his career. Got the job done in the end.

Just like the rest of the defense, it’s hard to rate Smalling very high since Arsenal generated lots of clear scoring chances and could have gotten a better result hadn’t it been for De Gea’s stellar performance. Smalling was expected to tighten the gaps defensively and ultimately he was expected to limit the impact of both Alexis and Lacazette. It’s safe to say he failed on that.

The Ecuadorian operated as a wing-back, but had enough freedom to push the lines forward everytime he had the chance. Mourinho should allow him to do that in every game from now on, as the former Wigan star opened the score with a beautiful shot that went straight between the legs of Petr Cech. Valencia does not shine, but he does exactly what the manager asks him. And that is quite a plus with Mourinho on the bench.

The French starlet was having a very good performance, and in fact he was the master mind behind United’s third goal since one of his attacking runs allowed Jesse Lingard to tap the ball home from very close range. But he committed a criminal foul over Hector Bellerin shortly after that. And as a result, the Frenchman will likely won’t be available for next week’s pivotal contest against Manchester City. He finished with two assists, but there is no doubt his absence next week against The Citizens will be huge.

The Serbian midfielder made quite an impact on the defensive end. He had to cover the spaces left by Pogba when the French operated on a more attacking role, and looked quite competent doing so. The numbers don’t lie, and Matic was quite involved on the defensive end of the pitch. He finished with 10 clearances, three blocked shots, three interceptions, four tackles, and a huge clearance off the line.

Young has been one of the best players for Manchester United during the past month, and once again delivered a strong effort against The Gunners. Young at times looked like a left-back, but looked threatening when adopted a more attacking stance at times. Covered the entire left flank, and was quite important from a tactical point of view. Has settled himself as a starter.

Hadn’t it been for De Gea’s impressive performance, Lingard could have very well received Man of the Match honors. And honestly, it would have been a deserved recognition for the winger. Lingard operated on a n°10 role behind the attacking duo of Anthony Martial and Romelu Lukaku, and thrived on that position. He had freedom to roam all over the attacking third, and the opposing midfielders had a hard time trying to stop him. Lingard has been on a tear of late, scoring three goals over his last two Premier League appearances.

Lukaku could not score and honestly, we have seen better games from him. The Belgian striker did have some moments of brilliance, however. For instance, he started the sequence that led to the second goal. He also came inches away from scoring an own goal, but De Gea made one of the best saves of the season to deny that attempt. Overall, he was decent. But fans expect more out of him, especially in big games such as this one.

Martial extended his impressive run of form with a delightful assist to Lingard in United’s second goal, as his quick touch inside the box following a pass from Lukaku allowed the English international to beat Cech. He came close to score in the second half as well. However, his effort from close range bounced off an Arsenal defender near the goal line. Martial did not score, but he looked quite active and his presence certainly complicated the opposing defenders.

Ander Herrera added fresh legs in midfield, but didn’t really thrive in this game. Matteo Darmian added another defender to fill the gap left by Pogba’s red card. And Marcus Rashford barely touched the ball since he came on nearing stoppage time. 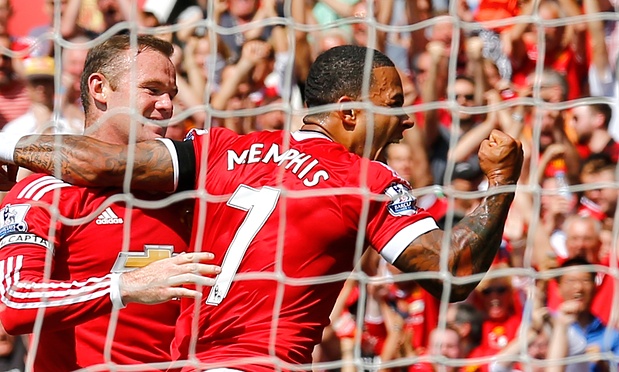