Manchester United fans everywhere are readying themselves for tonight’s Europa League final against Ajax tonight – with potential for the Old Trafford outfit to sign a world-class attacker if they win the tournament.

Victory in Stockholm would assure that the Red Devils play Champions League football next season and would confirm the 2016-17 campaign as a success.

While winning another piece of silverware will be Jose Mourinho’s main priority against Ajax, the knock-on benefits in this summer transfer market will be apparent if United qualify for Europe’s top tournament.

A new superstar attacker has been touted as a priority for the Old Trafford outfit before next season, with plenty of top-class men mentioned as targets.

However, one consistent name stated as a possible arrival before 2017-18 has been Atletico Madrid and France forward Antoine Griezmann.

The diminutive attacker has proven himself for club and country as a devastating player, with his goals, incision and creativity affirming him as one of the world’s best.

The former Real Sociedad man caused quite a stir earlier this week by stating on French television that he was “6/10 likely” to join United this summer.

As such, Spanish football expert Guillem Balague has been giving his views on Griezmann’s future ahead of the Europa League final.

The pundit is of the opinion that the Atletico star will move to Old Trafford should Mourinho’s men qualify for the Champions League.

“I’ve got the impression if United are in the Champions League, he will join them,” the journalist told Sky Sports.

“Manchester United are willing to pay the €100m (£87m) for his buyout clause.

“He perhaps sees Manchester United, in the medium term at least, as a candidate to win the Premier League and the Champions League, because of the money that will be invested into the side.

“He obviously wasn’t innocent when he said what he said to French television programme Quotidien. We’ve seen the images, and he quite clearly meant to do this. When he was asked out of 10 what the chances of going to Manchester United are, he said six.

“That number is not higher than six because he is waiting to see whether Manchester United make the Champions League.

“If they do not, he will still think about it. Meanwhile, what that means is that Atletico, who are preparing to offer him a new contract, have panicked and will put even more money on the table.

“He expects to choose between United and Atletico’s new contract.”

Griezmann is good friends with Paul Pogba due to their shared place in the France national squad and the Atletico attacker has stated in the past that he would like to play alongside the midfielder at club level.

United are expected to back Mourinho with considerable transfer funds this summer and the addition of the French forward would surely raise expectations that the club would fight for major silverware next season. 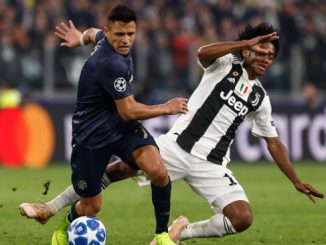