Wayne Rooney scored his 250th goal for Manchester United to rescue a late point at Stoke City to keep the club’s fading title aspirations alive. Rooney has now surpassed Sir Bobby Charlton’s record and is out on his own as the leading scoring for United, a superb achievement for a player signed from Everton nearly thirteen years ago. His strike was of pure genius, a goal Italian freekick masters Roberto Baggio, Alessandro Del Piero anad Francesco Totti would have be extremely proud of.

The record breaking goal wasn’t a deflection, a penalty or a tap in – but a freekick in injury team, when your team is 1-0 down and needs a big player to make an impact. Rooney was introduced midway through the second half for Juan Mata, who had scored an own goal in the first half to give Stoke City the lead, as the away side searched for an equaliser. It looked as if it was one of those days as chance after chance went begging – however, it was the United skipper that saved the day with his late wonder strike.

On a day where Liverpool, Manchester City and Tottenham all dropped points – it is an opportunity missed to close the gap on the top five and push for that coveted Champions League spot for next season. Chelsea can extend their lead at the top (with a win over Hull City today) to nine points over current second place Tottenham, fourteen points over United, whilst Arsenal (who host Burnley) can move into second place.

Wayne Rooney United’s record breaker and club legend
In between the first goal against Fenerbahce and his latest strike against Stoke City, we’ve seen some cracking goals over the years from Wayne Rooney. The volley against Newcastle United in 2005, the overhead kick against Manchester City in 2011 and the chip against Portsmouth in the FA Cup back in 2007 – to name three of the two hundred and fifty. Yes, the last few seasons have been tough in comparison to the explosive Rooney that we witnessed in the first half of his Manchester United career – but his strike against Stoke still highlights the quality that he can offer to the team, even as a substitute. Jose Mourinho wanted Rooney’s 250th goal to count and the United skipper more than delivered on that challenge.

Rooney is now out on his own at the top, ahead of the likes of Sir Bobby Charlton, Denis Law and the genius of George Best. To put it into perspective, there aren’t any players that graced Old Trafford in the past forty-five years that make up the top five, excluding Rooney. He is joined in the top ten by former teammates Ryan Giggs (168) and Paul Scholes (155), whilst opposing manager on the day, Mark Hughes (163), is 9th in the all time top goalscorers for the club. The club has seen some great goals forwards, since Sir Bobby Charlton finished playing, including Ruud van Nistelrooy, Cristiano Ronaldo and Brian McClair and it is a testament to the quality and longevity of United’s current skipper. The quality of names on this list highlights the magnitude of Rooney’s achievement.

Who knows what the future holds for Wayne Rooney, however goals like this one reiterates the quality he still has to offer at the top level. There have been suggestions in recent season that he would make the unlikely switch to the Chinese Super League or he could return to Goodison now that he is in the autumn of his career. As a player gets older, they need to adapt their game based upon their diminishing powers. It happens to every player – Diego Maradona wasn’t the same player at Sevilla compared to the explosive powerhouse he was at Napoli. Now that he is the latter stages of his career, Rooney needs to make an impact when he comes on as a substitute and ensure that when he does start, games do not pass him by – as we saw against Hull City in the semi-final of the League Cup.

A great goal by a great player and superb servant to the club.

United again dominate but fail to capture the three points

It was a similar story for United, who dominated proceedings against Stoke City, but just could not find the back of the net until Wayne Rooney rescued a dramatic late point. That was in the 94th minute and in between Juan Mata scoring an own goal just before the half way mark in the first half and Rooney’s strike – United missed chance after chance. The biggest culprit was Mata – who had a torrid afternoon and was eventually replaced by Rooney – who missed a glorious opportunity to equalise after some good work from Zlatan Ibrahimovic down the left hand side. The Swede rolled the ball across Lee Grant’s goalmouth into the path of the onrushing Mata, who proceeded to blaze the ball over the bar from six yards. Paul Pogba and Marouane Fellaini had volleys saved, but United ended the first half on top after a strong Stoke City start.

The second half was a case of attack versus defence, with the away side peppering Stoke City’s goal throughout the second half. Substitute Marcus Rashford smashed a good opportunity wide, whilst Jesse Lingard, also on as a sub, struck the crossbar with a late strike. It looked as if that was United’s lot, until Wayne Rooney stepped up to smash hime the equaliser. United has a penalty claim, from Juan Mata, turned down as United amassed twenty five shots on goal. The outcome of the match as whoo too familiar to how certain games played out earlier on in the season.

United dominated games against Burnley, Arsenal and Stoke City (at home) earlier in the season – but drew all three, having not been able to make the chances count. Mourinho had described his United side as “the unluckiest in the league” and although all of these games, including yesterday, should have resulted in a United win – the Portuguese must put this down to poor finishing in front of goal. Rashford, who was electric on the left hand side – giving Glenn Johnson a torrid time – has the quality to finish chances like the one he struck wide, whilst Juan Mata will not want to see his miss any time soon. 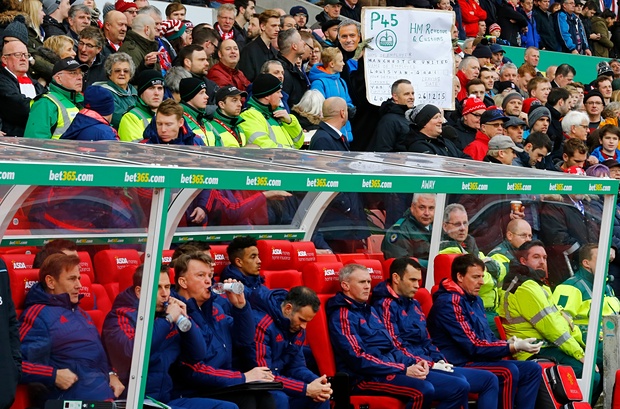