Manchester United manager Jose Mourinho defended his decision to omit World Cup winner Bastian Schweinsteiger from his squad for the forthcoming season. It was reported that Schweinsteiger was training with the reserves as his time at United looks to be numbered, with Mourinho considering the German surplus to requirements.

The issue is the £200k per week wages agreed last summer and to find a buyer for the player. Schweinsteiger has two more years to run on a three year deal following his move from Bayern Munich.

Mourinho was laughably attacked, with the suggestion that he should “go to jail” regarding the way in which he has handled the affair. Although the notion of jail is moronic, perhaps Mourinho could have instructed United to find a buyer much sooner (considering the Portuguese has been linked with the United hotseat since last winter) and to keep the player training with the first team – which would of course maintain some sort of transfer fee. All clubs are now well aware that United are looking to offload the player that was signed for £6.5million only 12 months ago. This of course would mean that Schweinsteiger is most likely to leave on a free transfer, as long as the player’s agent can negotiate a deal (regarding the hefty wage demands).

With Michael Carrick and Morgan Schneiderlin operating in a deeper midfield berth combined with the inevitability of the Paul Pogba signing – Schweinsteiger, despite his quality ball possession, would have struggled to fit into this United side under Mourinho.

The United boss, who was also vocal about Jurgen Klopp and Arsene Wenger’s comments on United target – Paul Pogba, was bullish in his response when asked about the Schweinsteiger situation:

“What is happening? Is happening what is happening in every club in the world which is the manager decides his squad and I choose a certain number of players to face the season and that’s it and I normally like to work with 20 players plus the three goalkeepers which is what I do for 15 years because we have so many players but at the same time we have also so many competitions and especially the Europa League competition is a competition that change a lot the profile of the season because you can play 15 matches, you can play on the Thursday, you have a big risk of travel a lot, normally you are going to play the Premier League on the Sunday so I make the decision to be with 23 players plus three goalkeepers which I think is still a lot and I had to make my decisions, it’s simple.”

It is a sorry end to a decorated professional who has won countless honours throughout his career, however – as deemed surplus to requirements – Mourinho is correct in looking to offload the player, but maybe the club should have acted a little earlier. 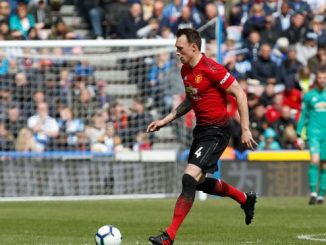