Manchester United’s only representative for the best player in Europe award, hasn’t even kicked a ball for the club! Zlatan Ibrahimovic, who signed for United on July 1st, was top goalscorer in Ligue 1 last season for PSG with an impressive 38 goals – 17 more than second placed Alexandre Lacazette of Lyon. The Swede is not in the running for the award, having finished outside the top ten, but finished ahead of the likes of Neymar, new Bayern Munich signing Renato Sanches and Manchester United target Paul Pogba.

Following United’s poor showing last season, only David De Gea or Anthony Martial would have warranted a mention, but neither were included.

The nominees for the top award are:

There were a total of 37 players nominated for the award, with champions Leicester City’s Riyad Mahrez just missing out on a top ten spot:

Ibrahimovic was also full of confidence when responding to legendary number seven and former United star Eric Cantona – who implied that there can only be “one King in Manchester”. The Swede, who admired the Frenchman growing up, agreed that he will not be “King of Manchester”, but “God of Manchester”.

Many reds once compared Dimitar Berbatov to Eric Cantona, however – Cantona had a certain mystic about him and came to United at the right time to showcase his skills. His talent was adored at Old Trafford and was a key part in United’s dominance from 1993 to 1997. If Ibrahimovic can help the club achieve even a small percentage of what Cantona did, many reds might well agree with him.

United fly out on their pre-season tour of China on Tuesday with fixtures against Borussia Dortmund (Friday) and Manchester City (Monday). It is reported that Ibrahimovic will miss the tour as new boss Jose Mourinho will give the player some time off. 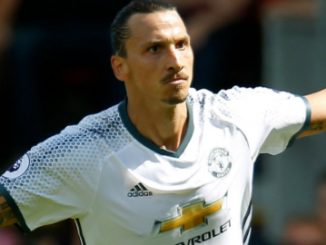