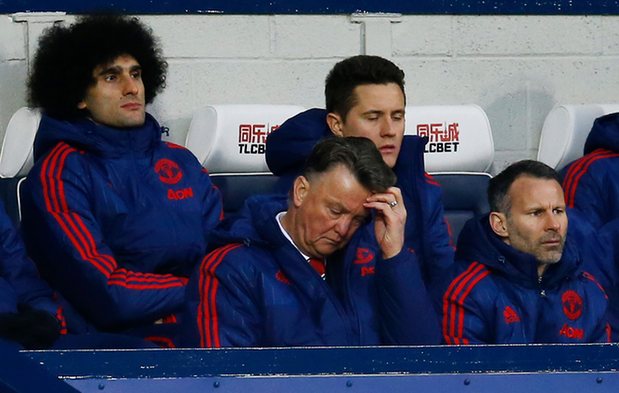 With City and West Ham having both picked up maximum points on Saturday, as well as ten-man Liverpool snatching a late win against a poor Palace, the pressure was really on for United to ensure they took all 3 points at West Bromwich Albion. Having beaten Arsenal and Watford in the league as well as the cup games against Midtjylland and Shrewsbury united are in their best winning run of the season and have looked largely impressive in doing so. However, under Van Gaal these winning runs tend to dry up fairly quickly and the struggle for consistency has been a defining factor of the Dutchman’s time at Manchester United. This again proved to be the case and United succumbed to a drab one nil loss to an unambitious yet functional West Brom side.

Van Gaal’s team selection today seemed to value experience with Smalling and Carrick returning to the spine of the team. Lingard and Damian also came back to the side replacing the recently impressive Varela and Memphis Depay, who had seemed to be hitting some form at last. These changes didn’t seem to benefit Unite particularly and also split up what seemed to be a blossoming partnership between Herrera and Schneiderlin. The baggies lined up with 3 former United players in Ben Foster, James Chester and the superb Darren Fletcher who continues to demonstrate the energy in central midfield which is so obviously lacking from United far too often.

The first half started as expected with united having most of the ball and West Brom happy to sit back and stay compact. United were comfortable in possession in the main, although at times also careless with their passing and not looking likely to threaten the former United keeper in goal. West Brom, although not seeing a lot of the ball did seem to pose more of a threat going forward than united and had a half chance for Berahino following a poor clearance from Daley Blind, this was blocked well by Smalling in what was to become a fairly common theme throughout the game. The first real action concerned a 3 minute period of madness from Juan Mata. The Spaniard, playing in his preferred number 10 position, was booked in the 24th minute for not retreating and then blocking a Darren Fletcher free kick. The free kick was deep in West Brom’s half and the risk of any counter attack was minimal, and where it could be considered worth a yellow in a more advanced position this was not the case here.

A player with the temperament and intelligence possessed by Mata should know better and to get booked for such a stupid act at so early on in the game seemed foolish in the extreme. This was to prove the case in the space of a few minutes as he collected his second booking and received his marching orders. Fletcher was again at the heart of it and as he attempted to dribble his way out of trouble not far outside his own box Mata took a wild swing and upended the former United favourite leaving Mike Dean with little choice but to send a bemused looking Juan Mata for an early bath. You could maybe make an argument that it was his first foul but in reality both were definite bookings and it is difficult to make a case for Mata staying on the pitch.

The man advantage nearly proved to be immediately decisive, albeit from an unlikely source. Craig Gardener hit a looping half volley from distance which had De Gea scrambling back and attempting a save but fortunately for united the ball dropped a shade wide of the left hand post. This was a rare moment of quality from either side and was the only worrying moment for either goalkeeper in the first half. West Brom appeared to be in the ascendency following Mata’s dismissal although failed to turn their superiority in to goals. Eventually United settled in to their new shape without Mata and saw out the half reasonably comfortably.

Manchester United started the second half as if they had forgotten they were a man down with some moments of real quality dribbling and footwork from Anthony Martial and Jesse Lingard. In Martial, United have a player with outstanding ability and when running at speed with the ball at his feet there are not many defenders who can handle him. He showed this quality in the 50th minute when he dribbled in from the left hand side showing excellent technique and strength to beat 2 men and get to the by-line before pulling the ball back for Rashford hanging on the edge of the area, United’s man of the moment hit it with his left foot but didn’t connect as well as he would hope and the ball was deflected out for a corner which came to nothing. This was about as good as it got from a United attacking perspective.

Having been second best so far in the second half West Brom needed to change things and were forced to do so by a Craig Dawson injury with Pocognoli coming on in the 55th minute. Although an unplanned substitution it turned out to be a game changing one as finally West Brom had a player providing some width. It was from this new found width that the game’s only goal was scored in the 67th minute, Pocognoli whipped in an excellent cross from the left and Rondon plucked the ball out of the air with a superb first touch to set himself and sweep the ball in to De Gea’s goal leaving the goalkeeper with no chance. As much as any goal is a disappointment this felt likely to be decisive and with united not only a man down but also lacking their most creative player the comeback never really looked likely, and so it proved to be.

United failed to create anything of note in the remaining 25 minutes or so and despite the obvious excuse of being a man down there did seem to be lack of urgency for a team who are chasing Champions league football. United now sit in 5th place, 2 points behind West Ham and instead of looking up towards City in 4th place they are now looking nervously over their shoulder at a Liverpool side 3 points behind them with a game in hand. As mentioned earlier United under Van Gaal have these bursts of form and pick up wins but invariably they don’t last long and unfortunately this is the case again, with the caveat that this defeat comes having played for 65 minutes with 10 men.
Aside from the result itself United fans can be heartened by the return to form of Chris Smalling, who was imperious back in the centre of the United defence and an absorbing battle between him and West Brom’s Salomon Rondon was one of the more interesting aspects of a game lacking in quality. Other than Smalling no United player really stood out, for good or bad. There was, as ever, plenty of possession, even with 10 men. No real chances were created and only the chance which provided the goal left rondon with a fair amount of work to do to score. United would hope to have been tighter on Rondon and could have defended the goal better but there was no huge error.

As you would expect from any Pulis team West Brom were well organised, compact and committed and if ever a team was a reflection of its manager it is this West Brom side. The decision to play with 4 centre backs is a defensively minded one but also has a strong effect on the way the Baggies attack, or don’t attack depending on which way you look at it. There is a distinct lack of width in the side and on paper they look to be a limited side not capable of causing too many attacking problems. This point was driven home by the improvement in West Brom’s attacking play once Pocognoli replaced Dawson. However, in Salomon Rondon and Saido Berahino they have an attacking pair who complements each other well, Berahino providing moments of subtlety to go with the hard running battering ram that is Rondon.

Where United go from here is anyone’s guess and although a loss today is an incredibly damaging result for United’s top four hopes the impact of Juan Mata’s red card cannot be understated and so to what extent you can blame Van Gall for this latest defeat is a moot point. What is for certain is that United were incredibly blunt against West Brom and sorely lacking in creativity. The only flashes of quality in the attacking third came in the form of individualism from Martial and Lingard and having created some space for themselves with good dribbles there was, barring the one shot from Rashford, an obvious lack of support. In possession United were ponderous and on numerous occasions where there was an opportunity to cross the ball it went back to the midfield to keep it instead.

One such moment summed up United’s attacking play today when in the 91st minute (with United supposedly desperate to score) what was a promising position on the right side of the West Brom box turned in to Daley Blind in possession back in the United half. The red card was an important factor in the match and West Brom eventually made the extra man count but this was the 5th red card of the Premier League weekend and in each of the previous 4 the team with 10 men had scored at last one goal, united looked like they could play until next Sunday and still not score.