Manchester United are looking for their first win since the 2-1 victory over Watford a month ago. In that time, United have been dumped out of the Champions League and have lost ground on leaders Leicester City in the league. This week has also seen the biggest managerial casualty of the season so far. Jose Mourinho was shown the Stamford Bridge exit as the Portuguese departs Chelsea for what is surely the final time. Some bookies have put Mourinho as favouite to be the next Manchester United manager. The independent have also suggested that Mourinho’s representatives have reached out to Manchester United as it is “the job he covets the most”.

Louis van Gaal will be looking over his shoulder as pressure grows on the United boss to start delivering a brand of football that is usually associated with the twenty times English champions. The news that Pep Guardiola is set to leave his post at Bayern Munich will of course have alerted Manchester City, Chelsea and to a lesser extent Arsenal – who will only ever act on Arsene Wenger’s terms. United will be in the mix for the in demand Spaniard, but Ryan Giggs is surely the more likely candidate to succeed the Dutchman when his contract expires in 2017.

United’s last home goal came in the 2-0 victory over WBA at the start of November , so United need to put in a performance against Norwich City, who last won at Old Trafford back in 1989/90 with a 2-0 victory at the beginning of the season. The visitors have conceded 18 goals away from Carrow Road this campaign, but are up against a United side that are goal shy at home – netting nine goals so far; sixteen goals fewer than Manchester City in third.

We are joined by Gary Gowers, who blogs over at My Football Writer. We caught up over that 92/93 season, how Alex Neil is doing so far and whether Louis van Gaal will last until the end of the season. You can following Gary on Twitter @Gary_Gowers.

FA Youth Cup: United’s under-18s to finally be rewarded for their performances?

1) How would you sum up Norwich’s season so far? Happy with progress?
Well, it started off OK and while the leaves were still on the trees we did a more than passable impersonation of a bona fide Premier League outfit. We conceded but we looked like scoring too. It was almost fun. But the wheels fell off at St James’ Park (of all places), where a naive, overly-ambitious set-up saw us hammered 6-2 on live TV. It was horrible and the consequences have been far reaching. In truth we have never fully recovered and now find ourselves in the bottom three. So, am I happy? No.

2) Are you happy with Alex Neil at the helm?
You’ll be hard pressed to find a City fan who’ll say a bad word about our own Sir Alex. He’s been excellent and is, in our view, a star in the making. Currently he’s been dealt a dodgy hand and will be hoping for a couple of Kings and perhaps an Ace to arrive in the January window, but – while he’s still learning at this level (he’s only a few months older than Wes Hoolahan) – his clarity of thought and no-nonsense approach sets him apart from many.

3) Do you think you will stay up this season? If so, who do you expect to go down?
As things stand we ARE one of the worst three teams in the league – the league table proves it – but much depends on our activity in the January window. If we can add two or three quality players to the mix – most notably a new centre-back – the we’ll give ourselves a chance of survival, although when you’re Norwich City it isn’t easy to attract said quality players. But, armed with my green and yellow tinted spectacles, I’m going for a bottom three of Villa, Sunderland and Swansea 😉

4) Who has been your star performer this season and who has been the biggest disappointment?
Our best player has been one of your old boys (albeit he never played for your first-team), Robbie Brady, closely followed by Wes Hoolahan who, at 33, is playing better than ever. The biggest disappointment has been Youssouf Mulumbu who got injured in pre-season and has barely featured. A shame really because he looked a good fit for us.

I don’t want to finish my career with the club sacking me That would be a great disappointment for me, to say goodbye to the football world by being fired.”

5) Do you think united are progressing under Louis van Gaal?
I guess the league table determines that you have ‘progressed’ and, realistically, you do have a chance of winning the league, but it doesn’t sound as if it’s been overly entertaining. LVG seems to specialise in the pragmatic approach, which historically is the antithesis of the Man Utd way. I suppose if you were to win the league no-one would complain.

6) Where will United finish this season?
I think you’ll finish third, behind City (sorry) and Arsenal.

7) What is your most memorable United Norwich clash?
For obvious reasons, our most recent victory over you, in November 2012, when Anthony Pilkington’s header gave us a 1-0 win at Carrow Road sticks in the mind. So too the 2-0 win in 2005 when Dean Ashton and Leon Mackenzie were the scorers. But generally it’s been a long line of disappointments and pain.

8) Back in 1992/93 – did you ever think you were going to win the league? What did you think of that United side
I don’t think many of us actually believed we could win it, although a 1-0 home win over Aston Villa late on in that season briefly took us top, and for a couple of weeks we dreamed. That was a great United side and I can vividly recall your 3-1 win at Norwich, in which you taught us a tough old lesson – Ince, Giggs, Kanchelskis, Cantona and co were in their pomp at that time.

9) Other than Ipswich, what victory is most satisfying?
Well, we have little love for Wolves, so any win over them is sweet but in Premier League terms any win over the ‘big boys’ is massive for us. Oh, and Leeds, and Watford, and Villa, and Liverpool…

10) What is your all time Norwich City xi?
Blimey, tough one. Right, off the top of my head and based only on players I’ve actually seen play…. 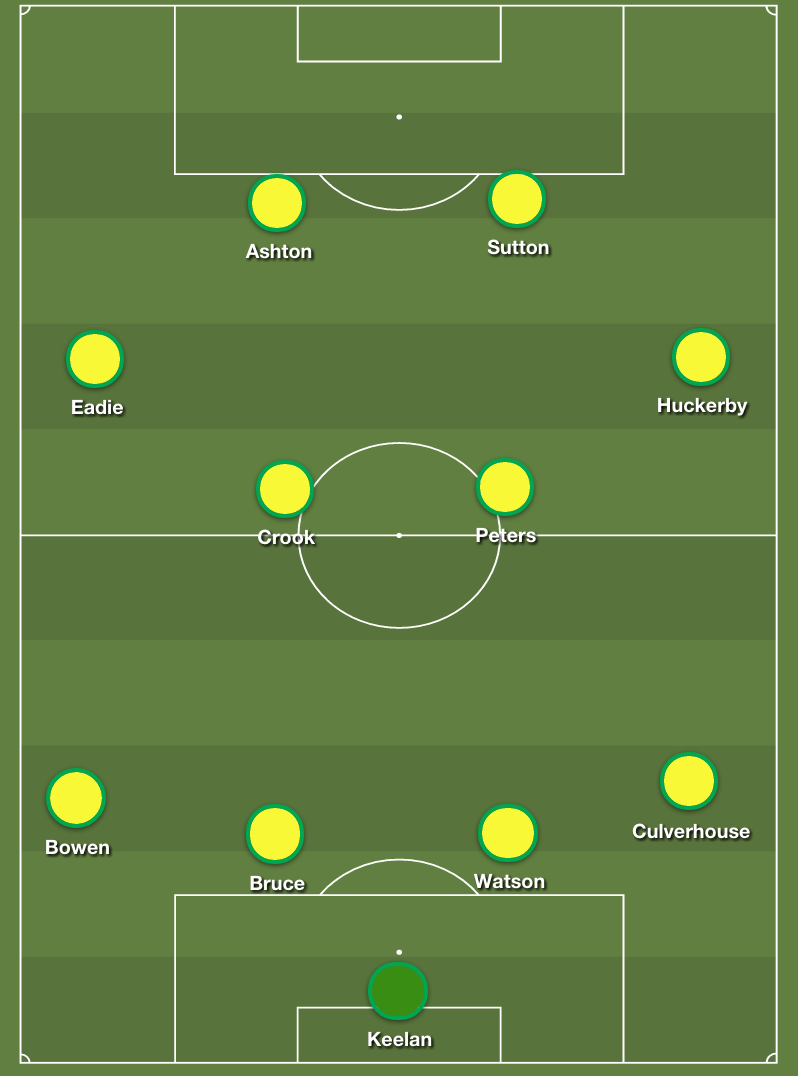