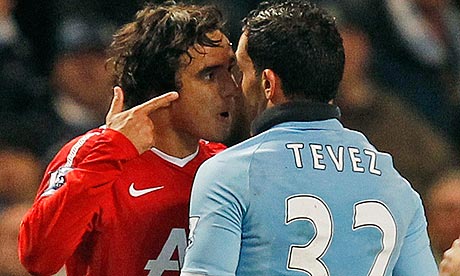 In a post-season that United fans can expect to see plenty of arrivals and departures, it seems inevitable that Rafael da Silva has played his last game for the club. Having lost his place in the side to Antonio Valencia, he last started a game away at Yeovil on the first weekend of 2015 and a series of minor injuries, the last being cracked ribs whilst playing for the U21 side in April, have ensured there wasn’t even the opportunity for a farewell appearance.

When Louis van Gaal took over at United, Rafael’s future had already been in doubt for twelve months. David Moyes had been linked to a move for one of his former players, Seamus Coleman, as well as other right backs. Like a lot of the players at the club, van Gaal inherited a player low on confidence and one that had undoubtedly regressed under the previous manager.

It had appeared that in Alex Ferguson’s final season in charge the rough edges to Rafael’s game had been smoothed. He was one of a number of players to improve and reach a consistently high level of performance. It certainly helped that those around him were playing well but there were obvious traits in his game that had been refined. In the end, he was unlucky to miss out on a place in the PFA Team of the Year, losing out to the equally excellent Zabaleta.

His ability to learn and improve were signs of growing maturity and something fans and staff were desperate to see from a player who was no longer a rookie. Regardless of last season’s regression, at the start of the season most hoped that van Gaal would have recognised a player who could adapt and adjust to both the right full back or wing back positions. Instead that doesn’t appear to have been the case. For whatever reason, whether it be the frequent injuries or a remaining perception of unreliability, van Gaal has opted for the more predictable yet solid, Valencia, particularly since the turn of the year.

It wasn’t long ago that this blog had an entry in praise of Valencia and his ability to do a lot of the basics of the role well. That remains the case, as does his consistency, despite the fact that there will be the odd defensive error given that he’s been an attacking player for the majority of his career. Undoubtedly Valencia is the steady but dull option, in comparison to Rafael’s perceived Tasmanian Devil. Rafael’s flaws are in many ways what makes him the more exciting option for supporters but, for a manager who demands players will do as they’re told, it’s easy to see why Valencia has won their battle this season.

First and foremost, Rafael is an attacking player and his inclination will always be to get forward and join the attack. He might get caught out of position at times but that’s going to happen with any full back when your primary function is to attack. It’s a strange quirk that United have made a conservative move by replacing a player who has developed as a defender with a winger.

Rafael has always endeared himself to United fans because of his passion. He’s fronted up to numerous opponents (think Tevez) and would be one of few players not to hide at Anfield. His infectious smile and street-style approach to the game is hard to dislike even if his passion could lead to some naïve and costly moments. He and his brother, Fabio, had courage and played to please. On the downside, both appeared to be made of brittle stuff. Particularly as teenagers, whilst their bodies were still developing, any kind of knock or fall would result in some time with the physios.

Despite a poor fitness record, Rafael had been fit and available for much of the second half of the season yet, despite this, 2014/15 will represent his fewest appearances for the club since his arrival. In 2015 he has found himself playing more for the U21 side than the first team. Even then he’s exemplified a great attitude, never complaining, at least not publicly, and always appeared willing and happy to play for the team. His professionalism certainly doesn’t appear to be in doubt.

There is definitely some frustration that he’s likely to leave having only really been given a small run in the team by van Gaal last autumn. Despite what happened under David Moyes, his overall development was on the right track. It may be that the coaches don’t trust him to stay fit or they don’t believe he can perform in the more tactical right back role that the manager wants. Either way, just 150 starts in seven years makes it clear that something’s not gone right.

Assuming there’s a buyer, he’ll leave quietly, gracefully and still smiling. His passion and enthusiasm for football will be missed.

Thanks to @KarateJesus44 for editing