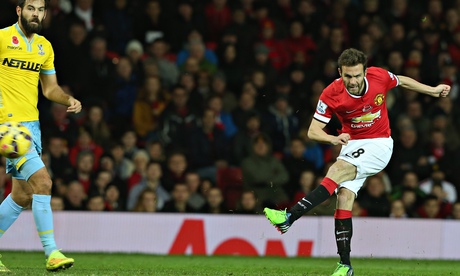 Manchester United notched up their first win since beating Everton over a month ago, with substitute Juan Mata getting the all important winner. United had a, yet again, a depleted back line, which forced Louis van Gaal to use another different centre half pairing. Youngster Paddy McNair lined up alongside Daley Blind who shift from midfield to defence to accommodate the retuning Michael Carrick.

Luke Shaw had his best game for United, demonstrating his impressive athleticism and pace for a lot of the game. Shaw, who had come in for criticism from van Gaal post World Cup regarding his physique, was always looking to burst forward from deep and get United up the pitch. There is no questioning the talent and potential of the young left back, he just needed to get games under his belt and regain match fitness.

Crystal Palace were unlucky not to score late in the first half, following a mix up between McNair and Blind to deal with a long ball, but former red Fraizer Campbell blazed high into the Stretford End. The win was United’s first clean sheet since the 4-0 thumping of QPR back in September.

Juan Mata off the bench to win it for United
Its now nine goals in twenty four appearances for the Spaniard, since his much anticipated move from Chelsea in January of this year. It has been expressed before that Juan Mata is a fine footballer who is capable of feeding balls through the narrowest of angles. Having said that, with Wayne Rooney suspended recently – Mata had a glorious opportunity to showcase his qualities as the number ten; a position he thrives in. However, very flat performances in the two draws against WBA and Chelsea, saw United’s number eight substituted on both occasions.

Against Palace, Mata demonstrated his class within four minutes of coming off the bench. The Spaniard played a one two with Angel Di Maria, before shifting the ball onto his favoured left foot and thundering a shot towards the Palace goal. The ball took a slight nick off the defender, which confused goalkeeper Julián Speroni in the Palace goal. Mata’s joy at scoring was then overpowered by his need to demonstrated who it actually was that scored the goal for United. It was a message to the manager that he believed he should have started the game.

In a post match interview, Mata spoke of his frustration at being on the bench at the start of the match, but Louis van Gaal indicated that Mata has had his fair share of football so far this season:

“Juan Mata has played a lot of matches. I have given him the chance, I give other players the chance and at the end we shall see who plays more than the other. It is always like that in football. “

Would you start Juan Mata against Arsenal in two weeks time?

Luke Shaw’s best game for United
Luke Shaw is the world’s most expensive teenager in football and against Crystal Palace, it was clear to see why United decided to pay all of that money to Southampton for the talents of the youngster. Shaw has had a slow start, with regards to the amount of matches he has played rather than in reference to his apparent out of shape physique, to the season – looking out of sorts against WBA and short of match practice.

He was named MOTM following his exploits on the left flank and will surely be a permanent fixture in United’s back four for well over the next decade. He demonstrated his athleticism and pace with just over a quarter of the game gone when he cut in from the left hand side, just past the halfway line, when he drove past three Palace players before smashing a left footed shot towards Speroni’s goal, who got down to his left to save.

Shaw was obviously pleased with his performance and tweeted the following post match:

Carrick back but still weak defensively
It was Michael Carrick’s first start since the 3-1 victory over Hull City, which of course marked Ryan Giggs’ final appearance in a red shirt. Carrick has been a pivotal part of United’s success in the eight and a half years since he signed from Tottenham Hotspur on the eve of the 2006 World Cup Finals and his experience and composure is a welcomed addition to a side crying out for some stability. It was no coincidence that United achieved only their third clean sheet all season – although clean sheets against three of the sides that make up the bottom four in the league – with Carrick back in the side. He protect the fragile centre half pairing, with a number of tackles, blocks and clearances and will surely start against Arsenal in two weeks time.

Many had thought that Carrick would be deployed as a centre half alongside Paddy McNair, however it was the Dutchman Daly Blind who was given the responsibility of playing centre half. United have a defensive crisis at the moment, with Chris Smalling suspended following his buffoonery against Manchester City last weekend and all of the following players are injured – Marcos Rojo, Phil Jones, Rafael and Jonny Evans. Louis van Gaal, despite only adding the Argentine Marcos Rojo to the United ranks in the summer, has limited choices at the back, which is why McNair has had a run in the side. It is still bewildering to some fans as to why the experience (over 1,000 appearances combined) of Nemanja Vidic, Rio Ferdinand and Patrice Evra was not replaced in the summer.

United dominated possession and had a over twenty shots to Crystal Palace’s six – but United will need to up their game when they travel to The Emirates on Saturday week. 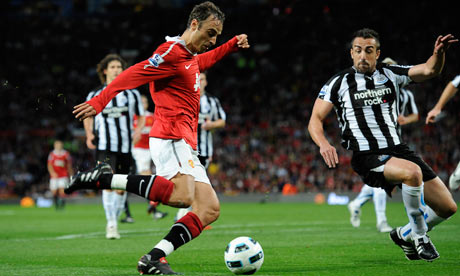