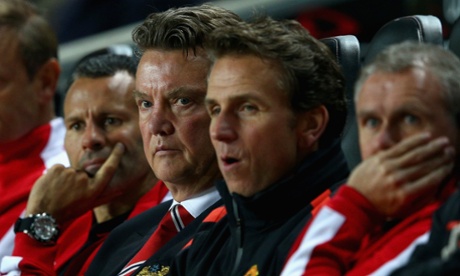 Louis van Gaal looks on as his Manchester United side are beaten 4-0 by MK Dons.

United’s shock defeat away to MK Dons in the League Cup and the manner of it will have raised a few eyebrows but it will have given van Gaal a bit of insight into some of his players but also opened some new questions or doubts about the system.

He looked incredibly nervous on his debut, almost overawed by playing in front of a full stadium and against a proper side. With no loan experience to call upon, it was the first time he’d played against ‘men’ and the occasion seemed to get to him. He was rightly withdrawn at half time but at 18 can only learn from the experience.

A really disappointing performance by a player who’s excelled in the Championship, and played ok over the summer for United. Whether he was exposed by the system or is struggling to understand it is up for debate (more on that later).

He’s not necessarily young but certainly still inexperienced in the United first team. Of the three at the back he was maybe the best but like most, had a torrid last 25 minutes. Despite deputizing at centre back for the U21s, he’s unquestionably more comfortable in wing back roles.

After a summer of progress and promise it was a disappointing debut. He seemed to try almost too hard and let the situation frustrate him. Going forwards he got into good positions but seemed to kill momentum by opting to play the ball back inside rather than cross or run at the MK Dons defenders.

Maybe a surprise inclusion but did himself no harm with his performance. Shifted from the number 10 role to a deeper role during the second half, he was always looking forwards and at least tried to change the point and focus of attack with angled passes and turns. Another 18 year old who can only learn from his debut half of first team football.

The brightest of the young players, unsurprisingly. Came on, tested their goalkeeper, made intelligent runs and offered a genuine threat with his pace. If there’s a criticism, it’s that he couldn’t get into the game when initially coming on.

Maybe the most disappointing performer on the night. Why? Because a player of his talent and ability should have come on and bossed the game. Instead, he lumbered around and seemed disinterested. He barely got out of first gear as if there was a sense of arrogance given who he was up against.

Much has already been said on social media about the more experienced players and how they performed. All I’d add is that some of the conclusions being reached about Evans seem terribly reactionary. Here’s a player who, for the last couple of years, has been good and reliable for United. He isn’t a bad player and one very poor performance certainly doesn’t make him that.

United probably still need one more experienced defender but actually the numbers aren’t so bad, particularly if Blind arrives to cover the left back area and if United are to resort to four at the back. On the whole, Tyler Blackett and Michael Keane have shown they can provide adequate back-up and cover and we should persevere with our own young players, particularly someone like Blackett who’s performed well (and of course is still learning and improving – it’s no surprise he’s not the finished article yet). What will be crucial is how much the club trust Evans, Jones and Smalling to stay injury free.

The lack of coherence shown by a team thrown together of U21 players, fringe first team players and some players needing minutes was unsurprising. However we once again saw that the new system that seemed so promising and quickly adapted to on tour is posing issues.

Three at the back has given the freedom to whichever centre back is in position to stride out of defence with the ball. A good trait indeed, apart from the fact they’re allowed to come so far that they go past our central midfielders, get into the opposition half and then panic when there’s nothing on. The quick turnover of possession that usually follows sees us exposed at the back and it’s easy for teams to counter effectively.

The other area of our play that seemed embroiled in the system’s confusion is what happens in the final third. It’s almost overcrowded – two forwards sitting high up but unable to make runs because they’d be offside and unable to move into the channels because the wingbacks are there. By the time the number 10 gets on the ball there are so many players back for the opposition that it’s impossible to find passes that can hurt them. Maybe most surprising is the lack of movement in general – there seems so little consideration to moving opposition players around and it’s all so static. Encouraging us to have possession just outside the area seems a tactic that’s working for our opponents; we’re best when countering not fannying around just outside the area and they seem to know that and know that we’re vulnerable to the counter attack that’ll almost certainly follow.

It’s one of those games that’ll hurt and make people angry but then when you look at the side we put out it’s actually not worth losing too much sleep over. Yes, they should have been able to put up more of a fight than they did but some of those players have been told they can leave; some haven’t played for months; and the rest were kids. It’s a team that won’t ever play together again and with at least 17 first team players left behind in Manchester it’s really not the end of the world. I can forgive the younger players who might be nervous or inexperienced; I can forgive rusty players like Evans or Powell (his first game in 6 months) but the attitude of some of the older players and their approach to the game leaves a bitter taste in the mouth.

Given that United are unlikely to win the league this season maybe it’s a shame to have gone out of one of the other cups in August – winning silverware of any kind if crucial and we’ve just had our chances of winning something take a big hit. Still, van Gaal knew he had a duty to protect his first team players given when the Sunderland game was and how many injuries he had. He’d have also no doubt been keen to get a closer look at some of the younger players.

The next steps are to see what happens to the system and the personnel. Van Gaal’s philosophy may take a while to become the norm for our players but he has always hinted that the system isn’t set in stone. With Di Maria’s arrival, some kind of 4-3-3 variation may well be used from now on. On paper, that should suit both the defence and attack more but it’s the area in between that will cause most unrest until Carrick and Herrera return and potentially another player is signed.