Alas. It might be that time. The time to say a big farewell to the Marouane Fellaini. He may indeed possess a hairstyle that belongs to a middle aged American lady in the late 1970s, but his time at Old Trafford is a very disappointing one. His ridiculously inflated £27.5 million transfer fee, which of course – was even more laughable when you heard the news that a month earlier, he could have been picked up for four million less – didn’t help matters. But former manager David Moyes and Edward Woodward waited until the the eleventh hour to unveil this tall, dark and – quite clumsy – new signing. Yes, Fellaini’s arrival at the club was met with the same groans of dissatisfaction that had met Sir Alex Ferguson’s successor a few months earlier.

Will Marouane Fellaini head to Naples? Or will the Belgian be given another crack at Old Trafford and show his class?

There have been rumours that Fellaini was in awe at his first training session at Carrington, overcome by the size of the club and now training with the likes of Wayne Rooney, Robin van Persie and Ryan Giggs. In all fairness to him, he of course didn’t have any say in his transfer fee, nor did he obviously envision the quite disastrous reign of the man who brought him to the Premier League from Standard Liège.

United were of course on the receiving end a few times from the midfielder, who would pluck the ball out of the air (not quite Zidane style) from a long punt up the field from the Everton back line. Rather than wondering what damage Fellaini could have on an opposing team were he in a red shirt, the alarms bells should have been ringing at the style of play we were witnessing.

There have been reports that Napoli and Rafa Benitez are keen to bring United’s number 31 to the south of Italy. There are suggestions of a loan move and even a £15 million bid. Many United fans would be extremely pleased with recuperating that sum of money back for a player who has contributed zero goals in 21 appearances for the club. When you’re paying such a hefty fee for a midfielder, it simply isn’t acceptable.

So, who in your time has been the worst signing for Manchester United? Contribution, transfer fee and adhering to the culture of the club are a handful of factors that play a part in determining who indeed was the biggest mistake. Of course, no player wants to perform badly, but can just be eaten up by the size of the club or the magnitude of what indeed they are doing. I mean, take Fernando Torres, he now appears he is missing open goals, just for a laugh. You can look a £50million player one day and then resemble a washed up has-been the next.

Here we take a look at five of the ‘worst’ transfers in United’s history:

Massimo Taibi
Ah yes. One of those programmes around a tournament or Christmas time where you get a bunch of washed up celebrities pandering to the camera with a whole host of shit jokes, impression or reasons as to why they are ‘football mad’ – you usually have that howler by Taibi against Southampton. He also acted like a lunatic in the 5-0 thrashing by Chelsea a week later. Flying out for crosses he was never going to get like the abysmal student exchange kid from Lithuania that you forced in goal at school – he was indeed culpable for Chris Sutton scoring a goal. Scandalous.

Having said that, United still went on to win the league – Taibi was soon found out, despite picking up a man of the match performance in the 3-2 victory over Liverpool at Anfield, and United didn’t break the bank to sign him. He was shit, mind.

Bebe
Bebe was signed by Sir Alex Ferguson, even though the legendary manager had never watched the Portuguese youngster in action – merely acting off a recommendations by former assistant manager Carlos Queiroz. Of course, everyone had wanted Bebe to make the grade considering his history – but in reality, the lighting quick forward looked more out his depth that you or I would do, but he was of course on the biggest stage. Often deployed on the wing, he netted a few goals in his time in cameo appearances against weak opposition – and it was no great surprise to see him depart to Benfica.

There are reports he wasn’t too far away from a call up to the national squad for the World Cup finals, so there is obviously ability there. He may not be the worst signing of all time, but most certainly – one of the oddest.

Garry Birltes
Garry, a two time European Cup winner with Brian Clough’s Nottingham Forest, couldn’t stop banging in the goals at the City ground. Forest beat Malmo in 79 and then Hamburg in the caldron that is the Santiago Bernabéu. He got off to a great start in the 1980/81 season, before United could take no more – and snapped up the forward for a cool £1.25 million. Things were looking good.

Sadly, nothing lasts forever and netted just twelve goals, and didn’t score his first league goal until the following season, for United in sixty three appearances. He was sold back to Forest in the 1982/83 season – money well spent!

William Prunier
The man that Patrice Evra poked fun at to Sir Alex Ferguson once. The distraught Frenchman couldn’t actually believe the his mentor had acted with such buffoonery and signed the balding fellow country man of our once left back. Yes, in the season that Hansen famously claimed “You can’t win anything with kids!” – you can’t actually win anything with crap French centre halves. Following the humiliating 4-1 humbling by Tottenham on New Years Day, he was shipped back to France. No doubt, Sir Alex Ferguson would have indeed resembled one of you lot midday on Sunday, woken from a drunken slumber, hazy confusion as to how on earth did I actually did that?!

A loan move, so surely not the worst signing – but indeed – pretty bad.

Eric Djemba Djemba, Kleberson & David Bellion
Yes, arguably the worst crop of players to stroll through the Old Trafford doors. What happened in the summer of 2003? We’d been chasing the goofy faced Ronaldinho for months, only to lose out to Barcelona in a Lyon hotel – if you believe what you read – right at the final hour! Instead we got Kleberson, the man who had apparently won the World Cup for Brazil twelve months earlier. Yes, if Sir Alex Ferguson hadn’t of signed Cristiano Ronaldo from Sporting Lisbon there would have been some serious eye brow raising. United were pretty woeful that season, combined with Rio Ferdinand’s ban for missing a drugs test – 2003/04 was one to remember in the league, although it was the last time United picked up the FA Cup.

You wouldn’t be surprised to know that none of the 2003 recruits played a single minute of the 2004 final. Well, all except Ronaldo – who opened the scoring.

So, if Marouane Fellaini does depart to pastures new – is he the worst signing to grace a Manchester United shirt? Expensive, cumbersome and a reminder of the tainted David Moyes era – yes, Fellaini hasn’t had it easy, but we will always be left with this memory against Bayern Munich. I’ve never seen anyone do this to World Cup winning captain Philipp Lahm. Take it away Marouane! 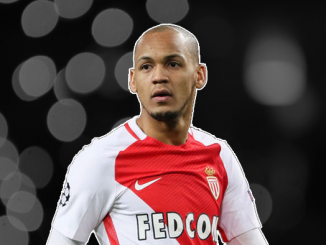 1 Comment on Will Marouane Fellaini leave Manchester United for Napoli?