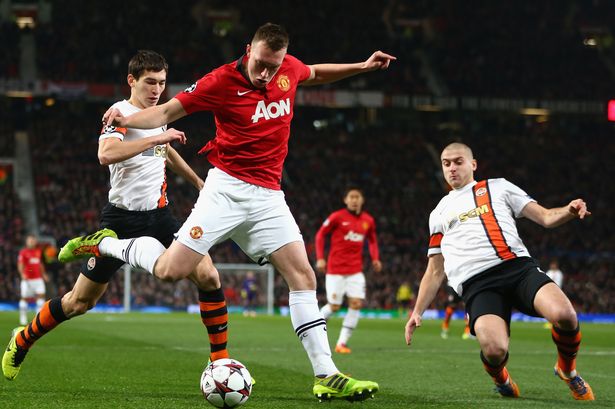 Phil Jones, the goalscorer, put in a decent midfield shift for United.

Last night, United broke their two-match home losing streak with a tense 1-0 win over Shakhtar Donetsk. In doing so, they secured their place as group A winners in the Champions League, and will therefore be looking forward to the draw for the first knockout round of the competition. United will be drawn against one of Galatasaray, Schalke, Milan, Olympiakos or Zenit. Here we’ll be looking at some of the major talking points from last night’s match, especially in terms of the tactical approach, and what they could mean for David Moyes’s side in the future.

Though David Moyes likes to stave away from talk of a regimented 4-4-2 approach, and instead hints at fluidity in his coaching philosophy, there can be no doubt that there has been a greater focus on wing-play, overlapping fullbacks and a more direct approach in the early days of the Scotsman’s tenure; with statistics released recently to expose United’s attacking prowess and acumen in the final third.  This has been highlighted via the sheer number of wide crosses coming into the box (and failing to create goal scoring chances) and the lack of key passes being played in central and high areas of the field. In short, United’s play hasn’t resembled the Everton of 2012, but far worse, and a throwback to the wing-play of the 70’s and 80’s. Of course, it might be too harsh to cast judgement on something as complex as a managerial philosophy so early on, and there is undoubtedly a transition effect taking hold at present (players are humans, and do not like change!); but the stats do illuminate what is becoming a worrying trend on the domestic front. United are set up not to concede, with only two and three players hitting the box; a central midfield which seeks to protect the back four almost exclusively; and a central defensive pairing implicitly instructed not to carry the ball into opposition territory (Jonny Evans has been sadly stunted) . Tonight saw the return of a much more fluid attacking approach, and perhaps a first real viewing of 4-2-3-1 under Moyes, which can only be a good thing.

Shinji Kagawa started in a withdrawn 10 role in behind Rooney, Januzaj in a narrow right position, and Young likewise on the left.  Perhaps then, the most telling aspect of the set up  was Kagawa’s starting position. In games such as Leverkusen away, Kagawa played much closer to Rooney, whereas tonight he sat just in front of the double pivot of Giggs and Jones, with his movement more lateral rather than vertical (and his back towards goal) throughout. It was pleasing to see, as the Japanese star seemed to be more involved in the build-up play, happy to come deep into his own half to take the ball and work the ball out to Januzaj and Young, or playing those ’round the corner’ type passes into the feet of Rooney.

Helping this approach was the positioning of the wide players, with the Belgian once again starting on the right side instead of the left; a slight adaptation that really does encourage a greater fluidity to a 4-2-3-1 , simply because the youngster doesn’t need to start so wide on the touchline in order to gain that extra couple of yards in which to ‘set’ himself. With the right starting berth, Januzaj finds it easier to work in unison with both Kagawa and Rooney (and van Persie later on), and floated in central areas with more fluency than when he has started out on the left, where the tendency was for him to work the touchline with Patrice Evra before seeking to centre the ball. The antidote (not a negative by the way) is Valencia in this position, who, whilst a world away from his early days where he lacked creativity in central positions, is still a winger in the traditional sense, and is part of the reason the crossing stats and lack of passing cohesion in the final third paints the sorry picture it does.

On the left, Young was frequently found in central areas when on the ball, and one or two passing triangles on the edge of the area actually released the winger through on goal. It was noticeable that Young was far less intent on putting the big cross into the box, and instead sought to move into the penalty area, or move closer to Rooney. That he didn’t have the best of games was largely irrelevant, as his job was to sit high on Srna without the ball (as well as help Buttner in retreat), but keep in close proximity to the front two when on it. United are suffering at present, no doubt, but a lot of it is down to the basics of game to game systems, playing with freedom, moving the ball quicker over the half way line and Moyes still trying to figure out his most effective partnerships on the pitch. The more he encourages the side to play like they did tonight, the less likely United are to slump further down the table, and a top 3 or 4 slot should not be the insurmountable challenge that it appears to be at present.

There were sighs of relief as van Persie made a start for United at Newcastle at the weekend, but should we have seen Robin at all you wonder? Of course it was great to see him in the team at a time of uncertainty, but there is certainly a worry regarding his fitness, with the prolonged groin injury affecting the Dutchman’s rhythm, and potentially his mindset at the moment. The defeat at home to Newcastle was far more galling given the narrative around Moyes’ supposed worries around Robin and his team selection(s), and whilst there was some agitation amongst sections of the support about going into the game against the Geordies potentially without 3 key talismen in Carrick, Rooney and Van Persie – what transpired was infinitely worse. Van Persie struggled from the start, both physically and tactically, and the television viewing public were treated to the desperate sight of Moyes mouthing to the forward, “Are you alright Robin, are you good to continue?” – a staggering spectacle, and one that never should have occurred. A fully fit Welbeck would surely have been the better solution to either start the game, or certainly to replace him at this particular point in the game (with 20 minutes to play), where a half-fit player no matter the calibre, should not be risked in order to bring ‘stability’ to a side or indeed appease any notion of hierarchy.

Back to Tuesday night then, and the striker’s introduction for Young made perfect sense, with Rooney unable to influence a tight game as the lone striker (with Shakthar intent on nullifying his threat, creating 2v1 scenario whenever he received the ball), and midfield ‘runners’ in short supply despite Kagawa’s and Januzaj’s best attempts. Van Persie took up the high position, which meant that Rooney was asked to drop into the hole in a similar fashion to that which brought success to the reds only 3 games ago. There has been much debate over the years as to Rooney’s best position at the club, and in many ways the question itself has often contrived to confuse the ensuing arguments and counter-arguments.

Rooney is not a central midfielder, and never will be at the highest level. There simply isn’t the positional acumen, discipline and the technique in his locker to excel there in a midfield two; but what Rooney does provide is a slightly untraditional and combative number ten approach (or 9 and a half) which has been absolutely vital to United’s success under Ferguson. The 29 year-old has improved his navigation of the field and close control in the last 18 months, and coupled with his now controlled aggression has really contributed in deeper positions, tracking back, tackling and generally making a nuisance amongst the opposition midfield. His natural pace and dribbling ability has meant it is preferential for him to be performing in this role more frequently than van Persie (who plays it differently, but with equal aplomb) as he is able to join the resulting attacks with greater verve. The whole United performance altered significantly upon the Dutchman’s introduction (Cleverley too should be praised), and within minutes an attack forced a corner from which Jones put us 1-0 up. The last few performances have been abject, and it is worth underlining Carrick’s absence once again – but one thing is clear if United and Moyes are to get their act together this season, and that is that Rooney (love him or loathe him) must keep fit, and must continue to dazzle in his withdrawn role; not a striker, not a ’10’, nor a ‘false 9’ …. a Wayne Rooney, and no more.

3 Comments on United 1-0 Shakhtar Donetsk: Through to the second round