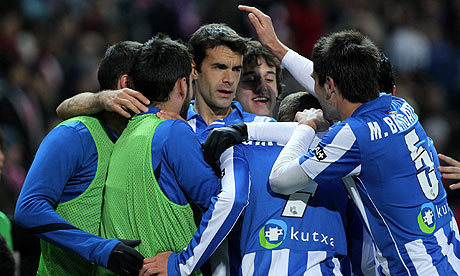 Manchester United welcome Spanish side Real Sociedad to Old Trafford on Wednesday hoping to pick up after a disappointing 1-1 draw with Southampton on Saturday afternoon. The visitors will be boosted but their excellent win over Valencia and will be eager to pick up their first point, or points, in the group stage so far having lost both previous fixtures. The Basque club are struggling to match the heights of last season following the loss of Asier Illarramendi and with ex-Arsenal forward Carlos Vela looking out of sorts, looking to follow his former team mate the Bernabeu.

The two clubs have never met before and David Moyes will be hoping his luck turns for the third group game. As always, we welcome comments from both sets of fans.

We have a cracking Q&A for you from Spanish football expert David Cartlidge, who you can follow on Twitter @davidjaca. We discuss United’s fear factor in northern Spain, Carlos Vela and how Sociedad will line up at Old Trafford.

1) In only three seasons Real Sociedad have come from the second tier to the champions league. What has been the reason for their success?

They’re a well-run club with a great philosophy, and there is much clarity when it comes to each step they’ll take as a club. At the heart of the club is Zubieta, their famed youth academy and one of the most respected in Spain. Xabi Alonso came from there, Mikel Arteta, Andoni Iraola, Aritz Aduriz. Then in recent years the nucleus that has formed the backbone of this team, perhaps their best ever generation. When they spend it’s wisely, and with excellent foresight. A connection and understanding of all levels of the club from top to bottom, from players to staff, has been huge.

2) This season has been a bit indifferent, however they will be full of confidence following their win over Valencia. Do Real Sociedad fans think they can replicate their heroics from last season?

The victory over Valencia was massive, perhaps the best moment of their season so far. Scratch that anyway, it was definitely the best moment. The season has been underwhelming, especially in comparison to the immense highs experienced last season. The fans are confident just off the back of that single win, it reminded them how good this team can be and the hope is the players realise it too. Yes, they’ve lost someone like Asier Illaramendi, but they can still perform better than what they’ve shown. This team isn’t lost, they can still complete a good season.

3) Two defeats isn’t a great start in the champions league. How confident are Sociedad that they can progress to the knock out stages?

There is a lot of scepticism; many are thinking is it best we get out of this competition and focus on the league, get Europa League qualification nailed down? The squad is smaller, especially when they’ll be battling on several fronts, and injuries are hitting them hard. In January, they’re unlikely to spend too. They want the team to give everything until the end, that’s the way here. So, better to go out with a bang if they are going to go out. I think there is an acceptance they’re going out, though.

4) How big a loss is Asier Illarramendi and can he go on to become a better player than Xabi Alonso?

Illaramendi’s been a huge loss, he was such an active presence in their midfield last season and such a mature performer too. An old head on young shoulders. It was a shock to the system he went, and the manner in which it occurred. La Real fans were really hurt, and even though he cried at the goodbye press conference, it left a bitter taste. I don’t think he’ll be as good as Xabi Alonso, or as influential on the bigger stage. The coaches at la Real largely preferred Rubén Pardo, he was seen as the better player and the great hope for the club. His story is still unfolding however, and remains extremely raw despite the odd impressive display.

5) Is Carlos Vela the main threat to United? Who else should United fans be concerned about?

Vela funnily enough is out of form, and in the last few hours an interview has emerged saying he’d like to join Real Madrid. There is even a hint he’d force it through. Back to his form however, he’s not playing with the same intensity as last season, or viewing the game in the same manner. I think he needs serious motivation, and a reason to fight for the club again. Antoine Griezmann is the player for United to watch, he’s the one player that possesses the most individual quality and can spin a game in an instance. He’s maturing a lot too, and isn’t the same silly little boy that gave ill-advised interviews about joining bigger clubs, or went out partying. He’s focused on his football, and it shows. I’m interested to see how Inigo Martínez steps up when facing Robin van Persie too. I rate the centre-back highly, and this will be a good test for him, but he needs to be at this level.

6) How will Sociedad line up?

The front three will all interchange, and the cohesion between them is what will be key for la Real. Those three working together and playing with a high level of intensity, is the best chance la Real have of winning this one. It’s been the problem this season though, finding that tempo and combination play. I. Martínez is their first port of attack, he likes to move out of defence and spray the ball across the field into wide areas and to creative players.

7) What are the thoughts in Northern Spain about United? Confident for a win?

There is confidence there even despite the form coming into the game. As we all know this is seen as a different United now and that news travels across to Spain. The analysts here aren’t enamoured by David Moyes’ United, or even the one in Sir Alex’s latter stages. There is a perception in Spain I believe, that United disregard the key central areas of midfield, from a defensive midfield point of view to the creative hub. I watch a lot of United through Spanish TV and it’s interesting to see how the analysis builds, it’s unbiased of course but can be pretty scathing at times.

8) Who is the greatest player to have pulled on a Sociedad shirt?

They’ve had some fantastic players and their success is probably forgotten. The team that won league titles back to back in 81/82 and 82/83 seasons was magnificent. Arconada, Larrañaga, Alonso (Xabi’s Dad…), Bakero, Satrústegui, Zamora and López Ufarte were in the regular setup. That team reads like a list of Spain’s greatest ever players. I’m going to say from personal opinion Bakero was the best, so beautiful to watch. La Real fans will likely say Arconada is their greatest though.

9) Can you give us a brief understand of the Basque clubs and the history behind them?

The Basque clubs are about pride and identity. The people that support them don’t just see them as football clubs, or another Spanish football club. They represent a way of life, and the person they are. The origins of Spanish football are soaked in Basque history, it was then through a progression the clubs didn’t succeed as much. The Basque people have always been fighting to retain everything; their language, culture and land. Athletic maintain their Basque only policy – though many will argue the lines have blurred somewhat in recent years. Real Sociedad ditched their policy some time ago, in 1989 when they signed John Aldridge. His signing was greeted with much disdain, well at least initially. Separatist graffiti on walls etc, banners, you name it. It goes back to what I said, there is a pride, a belief in an ideal.

10) Finally, United’s U19 side will be taking on the Sociedad equivalent a few hours before the first team, can you shed any light on them – form and quality?

Currently they’re 5th in Group II of the Juvenil level in Spain, which is split into various groups associated to the regions in Spain. At the end of the season everyone comes together for a big tournament featuring all the best sides in Spain. La Real’s setup at Juvenil level is pretty good, boasting players with good physical quality as well as technical ability. They’ve played twice and won twice in the UEFA Youth League, sitting 1st and hitting 8 goals in the process.

My favourite player from this group is an elegant, left-footed attacking midfielder called Martin Merquelanz. Brilliant vision, high level of technique and great in link-up play. United fans, think a Basque version of Januzaj! There is a good striker called Bautista too, a real poacher and with lots of pace. Luca Sangalli (his brother Marco just made his debut for the first team) and Eneko Capilla are another two to watch out for.