After two dull months of no football, excluding the silky Spain and ignoring the shambles that is England in the U21 European Championships, we’re back with a bang as Manchester United take on FA Cup winners Wigan Athletic in the Community Shield at Wembley.

Its all change at United with new manger David Moyes starting out in the footsteps of the great Sir Alex Ferguson and of course, the legendary Paul Scholes has moved on to pastures new. Despite the monumental change at the top, United fans are in position they haven’t been in since November 1986 – a new manager at the helm, which is exciting in itself. Here we take a look at the match preview with a superb view from the opposition as we discuss that superb victory over Manchester City, Antonio Valencia and whether or not Wayne Rooney still has it.

We’re lucky to again be joined by Wigan supporter Peter Walker of the This Is Northern Soul forum, who’s kindly given us his views of the Wigan team, Owen Coyle and whether or not the club can hang on to Maloney and McCarthy. You can follow Peter on Twitter here.

1) Were you happy with Owen Coyle’s appointment and has he changed your system at all?

McClaren would have been my choice, Coyle wasn’t a popular choice with a lot of Wigan fans but I’ve been impressed at how he has gone about his recruitment after the mass exodus at the end of the season

2) Do you expect to keep Maloney and McCarthy?

Both are loyal and are under contract for a couple of years but both of them would go with our blessings as they have been fantastic to the club. Gut feeling, Maloney will stay , McCarthy will go but only for big money

3) Your FA Cup win is one of the most remarkable of all time. What are your memories of that day and what was your original prediction?

Up until the day didn’t expect anything but a hammering but woke up on the day actually with a sneaking suspicion that we might just nick it…and we did. The goal when it went in was like it was in slow motion, unbelievable for little Wigan. City fans were extremely sporting after the game many shaking hands with us and wishing us well, a far cry from the Millwall fans after the semi.

4) Would you have swapped that win for a Champions League spot?

We can always get back in the P.L. but after 82 years we are now the holders of the biggest football cup in the world. ½ billion people watched the game, I watched Latics in front of 1,550 in 1976

5) What have you made of David Moyes’ appointment? Right man?

Time will tell, I’m not sure anyone could follow in such illustrious shoes. A lot of big personalities to manage and DM has a reputation as a man who doesn’t suffer fools, fun times ahead?

6) Lots of talk regarding Wayne Rooney leaving. What do you think of him and at 27, surely he still has lots to offer?

The guy has the class, I’m not sure he still has the will

7) How do you expect to line up on Sunday?

Coyle favours 4-5-1 and expect the same line up as last weekend;

8) If you could take one United player to Wigan, who would it be?

Luis Antonio Valencia, a class player when fit and will always be one of ours

9) Where will you finish in the Championship this season?

Difficult to say, they are about 14 clubs capable of going up and we are one of them. 55 games minimum is a lot of games, play offs probably

10) Give us a little known fact about the Latics.

Bernard who has compiled a history of Wigan Borough our predecessor and ourselves would probably be able to give you hundreds. Springfield Park had the biggest playing area of all clubs and used to have a trotting track around it.

Manchester United
All eyes will be on whether or not Wayne Rooney is included within the squad. United’s number ten, who has been the subject of two Chelsea bids over the summer, will be back at Wembley on Wednesday with the national squad, so surely that “shoulder injury” has cleared by now?

Both Nani and Hernandez have picked up muscles problems, whilst Kagawa and Valencia aren’t match fit considering the extra holidays issued to the players. Kagawa was given a week off following the Japanese tour.

Wigan Athletic
The Latics are without club captain Gary Caldwell who has picked up a hip injury. Defender Ivan Ramis is still missing from action having rupturing his cruciate ligament in January and new signing Thomas Rogne has a back injury and will not be risked.

David Moyes has the chance to win his first piece of silverware with Manchester United on Sunday and will surely field a strong side against the FA Cup holders. David De Gea, who had an excellent season last term, will start in goal with Rafael, Vidic, Evans and Evra in front of him at the back. Rio Ferdinand played 80 minutes in his testimonial match last Friday, so could well be rested.

Jones could anchor the midfield alongside United’s player of the season last term Michael Carrick, with Ryan Giggs operating just in front off of Robin van Persie. Danny Welbeck, who no doubt will want to play through the centre at some point this season, could be asked to do what he did so well last term and operate on the left flank, whilst new boy Wilfried Zaha could be given his first competitive debut if Nani isn’t deemed fit enough to start. 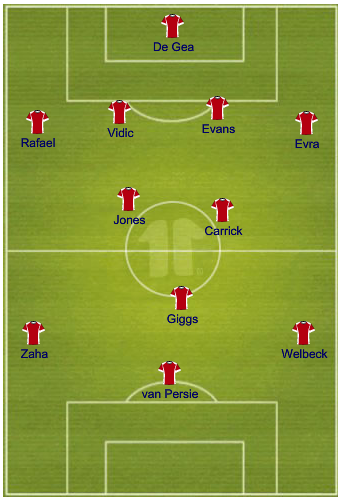 How would you line up on Sunday?

On paper, United should walk it as they did in the 2006 League Cup final. But like on that day, United could well have a disgruntled forward on the bench, who’s future could well decide the title this season. Ruud van Nistelrooy was soon sold to Real Madrid following that League Cup win, but United didn’t need him in the end – winning three league titles and a European Cup in the between. Rooney on the other hand, if he does go to Chelsea, could well be the missing piece in Jose Mourinho’s side.

Many United fans feel aggrieved at the way Rooney has handled himself since the title celebrations in May, especially considering it wasn’t too long ago he handed in a transfer request stating that United weren’t ambitious enough. Rooney will definitely be a major talking point tomorrow, especially if he makes the bench – which is surely unlikely. Michael Owen believes thats its not a question of money, but whether he feels wanted at Old Trafford. Only people at the club know whether this is true, but surely any United fan would not want to see Wayne Rooney lining up in a Chelsea shirt next season? It is a regrettable situation for both the player and the club.

Away from the obvious Rooney discussions, David Moyes will be under the spotlight, especially after his failure to luew Spanish playmaker Cesc Fabregas away from Barcelona. United’s transfer dealings resembled a travelling circus, with leaks all over the place – a far cry from the way in which David Gill and Sir Alex Ferguson used to handle business. There is nothing better than getting your competitive Manchester United career off with a trophy win and Moyes has a chance to make it sixteen Community Shield wins (outright, United hold the current record of nineteen wins with four shared) by beating Wigan.

United have only ever met Wigan in the Premier League era and, as mentioned previously, once in the League Cup at Cardiff in 2006. United have won seventeen of the eighteen ties, with Wigan’s only win coming at the end of the 2011/12 season – a crucial three points dropped for United, which ultimately gave Manchester City the initiative to win the league title. Despite the poor pre season results and the even more erratic transfer dealings, United must surely win handsomely. 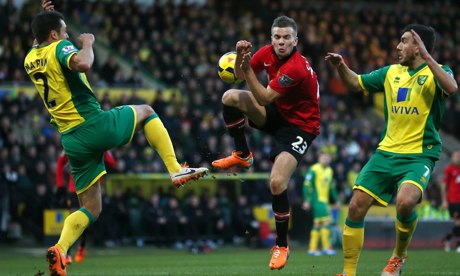 9 Comments on Wigan Athletic vs. Manchester United preview: Line up and prediction