David Moyes’ first league match at home couldn’t come much tougher as Jose Mourinho’s Chelsea take on United at Old Trafford. No doubt, Wayne Rooney’s inclusion will be the main talking point before kick off, considering Chelsea have made two failed bids for the player. Rooney was a substitute against Swansea City last weekend, but was able to notch up two assists when he came on to the pitch. Chelsea were victorious at Old Trafford last season, with a late strike from Juan Mata, although United did already have the league title wrapped up.

We have a great view from the opposition were we discuss United opting for Moyes over Mourinho, Kevin De Bruyne and Chelsea’s pursuit of Wayne Rooney. We welcome comments from both sets of fans.

We caught up with our usual Chelsea content Joe, who blogs at Plains Of Almeria. You can follow Joe on Twitter @JoeTweeds. Joe thinks the game will end in a 1-1 draw and United will finish third behind Chelsea and City.

1) Jose Mourinho is back at the bridge, will he be as successful as his first stint?
I think there probably needs to be a different definition of success this time around. In José’s first stint he had a squad in their peak and he subsequently demolished the league with that side for two seasons straight. Upon his return we have an excellent young squad who he must shape, coach and mould into a side capable of challenging for the title. I think the overriding opinion at Stamford Bridge is that the raw tools are there but a manager of José’s undoubted quality needs to help them reach their potential. Success, therefore, will be judged not only on the trophies delivered but on the quality of the team that Mourinho produces. Ultimately these are two entirely different challenges and juxtaposing them is slightly unfair. Ultimately trophies are the headline makers, but this time around they will only be delivered if he nurtures this young group.

2) What have you made of Chelsea’s transfer pursuit of Wayne Rooney and also the players you’ve brought in?
Personally he was nowhere near my list of strikers that I would want to see playing for Chelsea. I think it is crazy that during three transfer windows we have only attempted to sign one striker. Torres, frankly, is abject and seeing him meander around the pitch at half his capacity is saddening but also now annoying. When you think how talented our plethora of attacking midfield options are the fact we start Torres in front of them is incomprehensible. Comparing our strike force to yours or City’s and you can see just where most of our problems stem from. Onto Rooney and I very much doubt that he will sign here. Regardless of my thoughts on him he is infinitely better than anything we have at the club. I am sure Moyes has noted that any half decent striker in our current setup will score goals. He cannot take the chance that Rooney rediscovers his irresistible form because that would really cement us as title contenders.

In terms of new signings I really like the look of André Schürrle. The perfect example of know-it-all Twitter types actually knowing very little beyond a WhoScored.com report and stuff they have read. I must have heard a dozen people bemoaning his signing as someone who can only play on the left (direct competition for Hazard) and with a poor conversion rate. Not only has he given two fantastic cameo performances but he has already come out and specifically said he can play anywhere from leading the line to left, right or central attacking positions. He offers genuine width, pace and directness – something that is not associated with most of our creative outlets.

Marco van Ginkel is another name to keep an eye on and I would feel by the end of the season people will be wondering how we spent so little money on him. Very comfortable on the ball, he should evolve into the crisp passing modern central midfielder that Chelsea have lacked since Ballack’s departure. A little of Vidal and Marchisio in his game, he tackles well, distributes quickly and accurately and has an eye for goal.

3) Do you think Juan Mata was offered to United as a part exchange?
No. Can I be that succinct? Offering our best player to a direct rival for an inferior player just does not make sense. Slotting Mata in behind Van Persie would spell the end of the title race for the next three seasons.

4) What are you aspirations for this season? Both domestically and in Europe?
Domestically I am hoping for a top two finish. I am not realistically expecting a title challenge this season, but that may change if we buy a striker of sufficient quality. The main thing I and a lot of fans want to see is the direction that this young squad are heading in. If they gel, show signs of development and some impressive performances that is fantastic. I would love another FA Cup win and always feel that any trophy for a young squad imbues that mentality within them. In Europe a repeat of last season would be disastrous – yes the Europa League final in Amsterdam on the beers was epic, but we really need to be pushing on once again. I think a strong showing and semi-finals would be a great achievement, but with Chelsea you never know.

5) Do you think David Moyes was the correct choice to replace Sir Alex Ferguson and what do you make of the rumours that Mourinho was rejected for the job?
Being completely honest and I might get this completely wrong but I just do not see Moyes as the Manchester United manager. It is arguably one of, if not, the biggest jobs in world football and to hire someone with absolutely no record to speak of was slightly odd. To think of all the managers that you could have taken on board to plump for Moyes seems bizarre. Without question Mourinho would have been interested in the job, but I naturally accept that there are not many managers who would turn it down. I don’t buy the angling for the job comments, he did exactly the same thing with Dortmund after their game and I am pretty sure he wasn’t after that job. José is a master of mind games and that seems to have been lost in all of this. If you believe anecdotal bits and bobs you hear around Chelsea then José had actually signed a pre-agreement in January and much of his personal life would suggest that to be true.

6) How do you think Chelsea will line up on Monday?
My personal line-up and how Mourinho is likely to start are probably different.

Mata has barely trained since a knock in preseason and looked very leggy against Aston Villa as a result. De Bruyne is a wonderful player and offers a hybrid of width and number ten creativity. Oscar is my pick for breakout player of the season. I think Lampard is unlikely to start after two consecutive games.

7) If you could take one United player, who would it be and why?
Obvious? Imagine Van Persie in front of Hazard, Oscar, Mata, De Bruyne, Schürrle etc…

8) Roman Abramovich celebrated 10 years at Chelsea last week, if you could give him one piece of advice, what would it be?
Lose that “brand” jacket in the winter. I’m sure you can afford a decent tailor, so get yourself a nice warm jacket made for you.

9) Tell us about a Chelsea player that may surprise us this season.
Kevin De Bruyne. If he stays fit is a potential Young Player of the Year candidate. His two-footed-ness, passing range, skill, pace, dribbling and close control are exceptional. To those who watch the Belgian national team he is hardly an unknown quantity. Nevertheless, he seems to make that forward trio of players tick and as such is likely to develop into an integral part of Mourinho’s plans this season.

10) What will the result be on Monday and in what order will the top four finish?
I never predict a win against United, so I think a 1-1 draw is likely. My top four are 1. City; 2. Chelsea; 3. United (only on the basis that the law of averages says RVP is due an injury) and 4. Tottenham.

Manchester United
United are without Brazilian fullback Rafael, who picked up a hamstring injury in the 2-0 victory over Wigan Athletic, whilst Ashley Young and Nani are expected to miss the clash due to foot and groin injuries respectively. Lastly, Javier Hernandez, who has a superb scoring recored against Chelsea, is reportedly out with a hamstring injury.

Chelsea
David Luiz is the only major doubt and faces a late fitness test, which if passed he should line up along side John Terry in the centre of defence.

David De Gea will line up, as usual, in goal with Jones, Ferdinand, Vidic and Evra in front. Both Carrick and Cleverley should operate as a midfield two, with Valencia and Welbeck in wide areas. The big decision will be whether or not David Moyes includes Wayne Rooney in the starting line up, just off of Robin van Persie. Nik believes United could line up the same as Swansea away, which would include Ryan Giggs on the left and Welbeck through the middle. His fitness and mindset are the obvious concerns, but only Moyes will be bale to know whether or not he will be able to start. 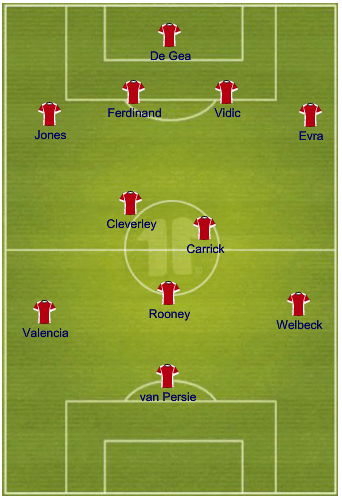 Chelsea head to Old Trafford having won both of their home games so far this season, against Hull City and Aston Villa. Mourinho’s last visit to United, with Real Madrid in the Champions League, resulted in a controversial 2-1 victory to the Spanish club. Mourinho looked distraught following his victory and remarked “the best side lost”. Fast forward five months and the Portuguese manager will not be as generous with his praise for the English Champions.

If Chelsea had of signed Wayne Rooney, the move would surely have rejuvenated United’s want away star, who would be playing in a side that is crying out for world class forward. United are adamant that he will not be sold and Chelsea appear to have turned their attention to William, who is awaiting a work permit, and Samuel Eto’o who worked with Jose Mourinho at Inter Milan.

United’s defensive line will no doubt be tested by wide players Hazard and Oscar, who will look to counter attack at any given opportunity. Valencia has been used previously to stop Ashley Cole pushing on to join the attack, having said that – Eden Hazard will be looking to run at Phil Jones, so will need defensive cover – either by Valencia or Cleverley. City’s defeat to Cardiff gives both clubs an opportunity to get an early lead in the table. For David Moyes, this could be his first victory over Jose Mourinho, having lost four times and drawn twice against the Chelsea manager in his first stint in England. 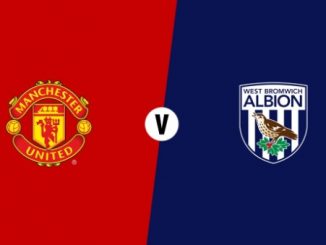