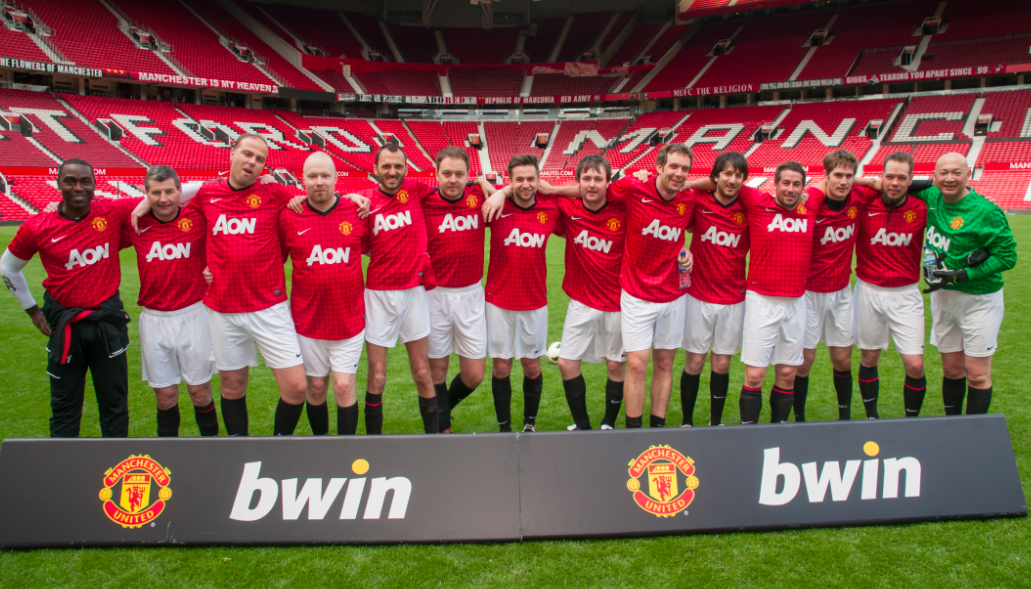 Although extremely rare, there are opportunities that come along in your life that simply do not make sense. In early May I was offered the chance to run a competition for a lucky Stretford-end.com reader to play at Old Trafford alongside some of the Manchester United legends squad. Our blog was also offered the chance to send two representatives along to participate in the match and a training session run by coaches who teach the academy. Read on to see some of our photos of Denis Irwin, Gary Neville, Dion Dublin and Andy Cole.

I don’t usually post about my personal experiences as my original objectives for the blog was to create a Manchester United community, which offers insight on club news, chants and statistical information. Hopefully we’ve kept to that original ethos, which could be one of the reason we were asked to run such an amazing prize. Bwin ran the competition and were excellent hosts – it truly was a money can’t buy experience and I’m grateful we were invited.

Andy Cole and Dion Dublin joined us in Wings restaurant the night before for a superb meal and discussed the match the following day. No one fancied going in goal (why would you?), so Mr Wing – the restaurant proprietor – threw his gloves in the ring and he was installed as our captain on Andy Cole’s team. I put my case forward to play in the centre of midfield, and was duly rewarded. Bwin picked up the bill for all the food and booze – although it was an early night ahead of the match in the morning.

We met at Old Trafford around 10 O’clock and were sent to the Stretford suite where we met Andy Cole and Dion Dublin who were joined by Denis Irwin and Gary Neville. Andy Cole and Denis Irwin were on my side, whilst Dion Dublin and Gary Neville were on the opposing team. We changed in the home dressing room and I was given the number 11 shirt to play in the centre of the park alongside Andy Cole. Alan Keegan, United’s stadium compere, introduced us to Old Trafford in an extremely surreal experience.

I won’t bore you with a match report that included players who looked a bit like picking up a new football game on the Xbox and not knowing what is the shoot, pass or cross button – but I did manage to open the scoring with a glorious 40 yard chip (honestly) and notch up another goal later in the match. We were allowed to take some pictures on the pitch, have a bit of keepy uppy and then dine with the legends in the Stretford suite. This was followed by a Q&A with the players, who spoke fondly of their time at Old Trafford and of Sir Alex Ferguson in particular.

I doubt I will ever experience something like that ever again and I’m so grateful that we could attend. My mates poked fun at me (and still do) when the blog was started in 2006 – but events like this make it all worth the while.