Manchester United have an opportunity to win the league title on Monday night with a win over relegation threatened Aston Villa. United were involved in an epic comeback back in November, beating Villa 3-2. Earlier in the season, United made a habit of going behind before fighting back to win the tie. With Manchester City losing 3-1 at Spurs on Sunday, United have the opportunity to win an unprecedented twentieth league title. Here we discuss the match preview with a great view from the opposition, team news, potential United line up and a prediction. We welcome comments from both sets of fans.

As usual, we have put together a great View from the opposition ahead of the match. We caught up with Jamie Cutteridge and asked him about the 82 European Cup winning team, Lambert’s approach and if he thinks Villa will avoid the drop.

1) How would you sum up Villa’s season?

That’s tough. Really tough. In fact, it’s basically impossible to judge until the end of the season. If we stay up, with the side Lambert is building and the football we’re starting to play, then it’s been a good one. If we go down, he’s over-reached himself. We’ve seen glimpses of what that team could be (the first 60 minutes against United, the whole game at Anfield), but we’ve also seen some horror shows (being knocked out of the cups by Bradford and Milwall, 8-0 at Chelsea).

2) Do you think you’ll avoid the drop?

Gun to my head? Yes. But after the results thus far this weekend I’m not confident. In fact it’s looking more and more likely to go down to us and Wigan. And we’re at Wigan on the last day of the season. I’m terrified just thinking about it.

3) What are your thoughts on Paul Lambert?

Three months ago I wanted him gone. The team wasn’t working, his in-game changes seemed to have a consistently negative impact, I was fuming. But he seems to have turned it around. Yes we still struggle to hold a lead and his substitutions are occasionally baffling, but he’s got the team believing in themselves, and if they stay up then the side he’s built have the makings of something to be proud of. (That may sound ridiculous, but in the era where Premier League teams are built overnight with oil money, supporting a side where players are being brought through and developed is pretty pleasing. As long as we stay up.)

4) Villa’s record is pretty poor at Old Trafford, how do you think you’ll do Monday night?

I’ve written it off as a loss. But despite that, it’s really important. The hammering at Chelsea shattered the young side’s confidence and our next two games saw us concede seven without scoring. We can’t afford another mental blow in the run-in. If we lose 2-0 but put up a fight I’ll be happy.

5) Who has been your best player this season? And the worst?

The best is tougher than you may think. Benteke has obviously been a revelation, but Brad Guzan has kept us in endless amounts of games and not given Shay Given a look in. Andi Weimann also deserves a lot of credit and Ashley Westwood has been a revelation in the middle. But Benteke edges it from Guzan. As for the worst, it’s hard to pick on individuals as the side is still so young. (Steven Ireland aside. Ahem.) But if I had to name two players I’m most disappointed in I’d go for Barry Bannan and Ciaran Clark. Both have shown promise but both have come up short this year while more inexperienced players have forced them out of the side. We expected a lot from the two of them and they haven’t delivered.

The back five feels fairly settled at the moment. Guzan-Lowton-Vlaar-Baker-Bennett. Westwood and Delph will anchor the midfield while Gabby (if fit) and Weimann will support Benteke. Lambert may stick N’Zogbia in as the extra midfielder, Bowery for some youthful muscle or perhaps Sylla (‘Who?’ is entirely the right question) for a bit more midfield presence.

7) What have you made of United this season?

I don’t really know. On their day City seem a better side but more than any other this feels like a textbook Fergie team who can get results when they’re not playing well. It’s a cliche, but those things are cliches for a reason. Obviously players like De Gea and Rafael have taken big steps forward, Carrick is getting some overdue attention and RVP is terrifying, but the reality is that it isn’t a great United team from what I’m saying, just a sodding good one.

8) If you could take one player from United, who would it be?

Have you still got Macheda? I’d take him in an instant to stop him scoring against us. Is it too late to ask for Dwight Yorke back? But honestly, probably Carrick or Vidic. I know I should say RVP but scoring goals hasn’t been an issue this season, but experience and a cool head has been.

9) What’s your favourite ever United vs Villa match?

Gosh. They all just bring back painful memories. That 3-2 comeback in the cup still haunts me. I’d plump for our 1-0 win at OT a couple of seasons ago. I took a couple of United fans up with me and we all sat in the Villa end. They were giving it the biggun all the way up and were silent on the way home. Glorious. Plus Gabby scoring a winner never fails to make me happy.

10) Give us a fact about the 82 European Cup winning side.

Our starting goalie that day was subbed in the opening 10 minutes but still picked up his second European cup winners medal. His name? Jimmy Rimmer, substitute keeper for United in 68.

Manchester United
Ashley Young misses the vist of his former club after picking up an ankle injury in the Manchester derby. Young will not feature again this season and many are doubting whether Paul Scholes will return from a knee injury, with ex-skipper Bryan Robson concerned that the midfield genius could retire in the summer. Darren Fletcher is a long term injury absentee.

Aston Villa
Gabriel Agbonlahor is a major doubt for Paul Lambert’s side and faces a late fitness test on a groin strain. Agbonlahor injured himself in the victory over Stoke City, which forced him to miss the game last weekend against Fulham. Gary Gardner is back in training, however – will most likely feature next season after suffering knee ligament damage. Chris Herd, Marc Albrighton and Richard Dunne are all out of the fixture. 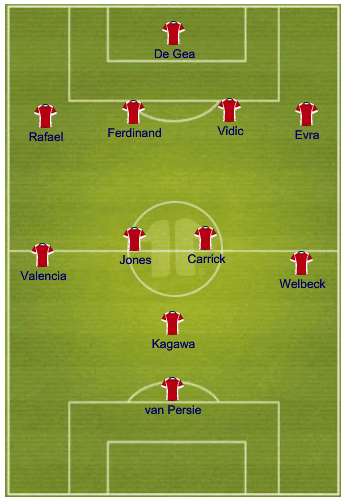 Manchester United have a very good record over Aston Villa and thumped the midland club 4-0 last season. Earlier in the season, a Javier Hernandez inspired performance helped United to a 3-2 victory, having gone two goals behind. Villa’s last win over United came in the 2009/10 season, when Gabriel Agbonlahor scored the only goal of the match. United were suffering from a defensive injury crisis in the December of 2009, which saw Darren Fletcher fill in at right back – however, Villa were worthy winners on the day.

Villa have won four games away from home this campaign. Sunderland, Liverpool, Reading and Stoke City have all suffered home defeats at the hands of Aston Villa. The relegation threatened club’s top goal scorer this season is Belgian forward Christian Benteke, who has been a revelation in his debut season. Villa have a young side, who would have suffered a blow to confidence after the 8-0 defeat away at Chelsea – however, Lambert’s financial constraints by the board means he has to rely on his younger players.

Sir Alex Ferguson may have rested the likes of Rio Ferdinand ahead of the trip to Arsenal next Sunday, however – like in the 2-0 win over Everton – the manager can change the team based upon other results. With City losing 3-1 to Spurs, United can wrap the title up tomorrow night in front of a home crowd. Wayne Rooney was poor away at West Ham last week, so Shinji Kagawa could fill in behind Robin van Persie – rather than being out on the left flank. Villa should avoid the drop, however – United will be too strong Monday evening and are closing in on a twentieth league title.

6 Comments on Manchester United vs. Aston Villa preview and line up