It seems an age ago. That goal against Barcelona in the Nou Camp in the ridiculously entertaining 3-3 draw. Andy Cole and Dwight Yorke were pivotal in Manchester United’s treble triumph, but that goal looked as if the pair had eyes in the back of their head. Fast forward fourteen and a half years and the lads are demonstrating their telepathic abilities once more as they take on Wayne Rooney, Javier Hernandez and Danny Welbeck in this great football challenge video.

Here are the stats for the four strikers from the respected seasons: 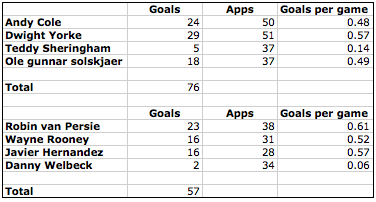 Here is the excellent video and please note, Wayne Rooney smacking himself in the face with the football. We’ve all done it Wazza:

For a chance to win one of two 1999 treble-winning shirts signed by Dwight Yorke and Andy Cole, and to see the outtakes from the above video, head over to bwin’s Facebook page.