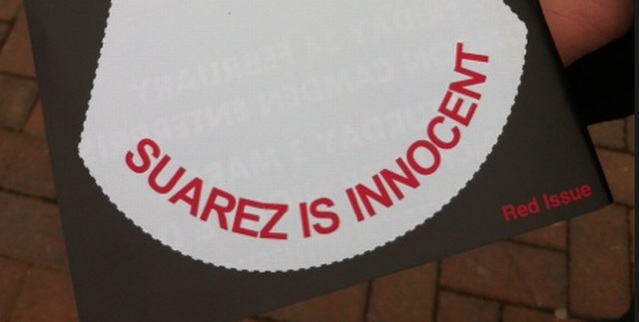 The following is the editorial from Red Issue #259 – the Manchester United fanzine. The fanzine goes on sale tonight before United host Athletic Bilbao.

satire n – 1. literary work in which topical issues, folly, or evil are held up to scorn by means of ridicule

Hopefully the above definition will prove useful to some at GMP, and in particular our old acquaintance Mark Roberts. As a City fan in charge of policing games at Old Trafford – “a proper bitter Bertie” according to one source who knew him at school – you’d think he’d have a sense of humour. Alas. His order last month for officers to confiscate RI wasn’t the first time this season he’s resorted to hopelessly disproportionate measures to clamp down on United supporters. After City were drawn against Napoli in Europe he took to the media in September to warn “Anyone found to be trying to incite tensions and disorder will be severely dealt with”, in response to ‘threats’ posted on Italian websites such as “City are going to make spaghetti out of your limbs and give your meatballs a good tenderising” and “Your knives are no match for our bananas”.

With United fans apparently behind this provocation of the notorious Neapolitan blade merchants, Roberts and co set to work. A demand from GMP came in to RI’s website demanding the identities of numerous posters responsible for such heinous crimes which, when cooperation was not forthcoming, was soon followed up with an official request from SOCA. Despite what you might think, SOCA is not some specialist football-related crimes division at Scotland Yard but is actually the Serious Organised Crime Agency. Yes, clearly not already burdened enough with the demands of keeping gang warfare in check on the streets of Britain, they really had been called in to get to the bottom of who told Luigi online that “Stockport branch is going to burn your city to the ground. If you see a banana; turn around, run and don’t look back”.

When SOCA’s further request was met with (wholly legal) non-compliance, PC Plod promised that a court order would be attained by the following Monday to compel the website to hand over the desired information or risk being in contempt of court. We can only assume there’s a bit of backlog down the sorting office because it seems to have gone the same unfortunate way as Sam Allardyce’s BBC-bound libel writ. Oh well. Meanwhile, despite all that virtual ‘incitement’ no Manchester City fans were injured on their visit to Italy, whereas six unfortunate Bayern Munich supporters came a-cropper and ended up with stab wounds when their team played there the previous month. Strange, that.

So there we have two utterly stupid recent investigations initiated by someone with Roberts’ seniority in GMP, yet at his appearance at the Football Supporters Federation’s ‘Watching Football Is Not A Crime’ event at Wastelands last week, he still seemed to suggest he is one who believes in the system. Roberts’ replies to complaint after complaint of mistreatment from Greater Manchester-based football supporters at the hands of GMP officers amounted to little more than “register your dissatisfaction and it will be addressed”. Ha, fat chance!

Last month’s RI that was seized on Roberts’ orders coincidentally contained details of GMP football intelligence [sic] officers directly under his command on European away trips bullying innocent United supporters and stealing their tickets. At Eastlands Roberts was challenged as to what powers his officers held when on foreign soil and he conceded that they had no more than any other British citizen. Why then are they going round acting as MUFC’s private security force and actively seeking out minor breaches of ticket allocation regulations that are of no consequence to local police and breach no laws in places like Germany and Spain? RI has been passed two separate police intelligence reports containing entries made by Roberts’ officers relating to their theft of United fans’ tickets; Roberts had earlier told the FSF meeting of those reports that “I see the files, I know what goes into them.” Taking him at his word, Roberts is the senior officer so why is he allowing these illegal acts of intimidation – little different in execution to TV-gangster style ‘shakedowns’ – to be undertaken by GMP officers being paid by Manchester taxpayers to uphold the law?

Oh yes, Roberts’ claim that formal complaints will drag his colleagues into line is a good one. There’s one GMP intelligence [sic] officer based under Roberts at Stretford police station who’s been acting outside his remit for years. Numerous complaints have been made against him in that time – yet another is trundling through the system at the moment – but he continues to act with impunity. Roberts confirmed last week that it is in breach of GMP’s code of conduct for them to publicise requests for people’s identities who they already knew, as they cajoled the MEN into doing after the City League Cup semi-final in 2010. Despite knowing exactly who one Red was, GMP demanded information on him in the MEN and then turned up mob-handed on his doorstep one morning with a Sky News camera in tow (that cosy police-NewsCorp relationship in evidence again). Ultimately he was not charged with any offence but the publicity cost him his livelihood. His real ‘offence’? Growing tired of said FIO and telling him where to go at a previous game.

Similarly, the most recent United fan to receive a GMP banning order application ‘on complaint’ (i.e. without having committed any offence) did likewise with the same FIO not so long ago and had GMP confiscate his passport before the trip to Amsterdam, as he was hauled into court to answer to a file of ‘evidence’ that is a mass of circumstantial waffle and includes the utterly ludicrous statement from one officer that says (and this is verbatim): “[XXXX] is not captured on this footage, however may have been there at the scene.” No need to mess about with that ‘beyond reasonable doubt’ nonsense; banning orders on complaint are a civil action, requiring a burden of proof only on the balance of probabilities.

And that same FIO was also the officer referred to in RI 218 when we told the tale of a Red assaulted by him in Lyon after being stitched up on a racist charge a few weeks earlier (video evidence subsequently secured a not-guilty verdict on the racist charge). As was reported back then, he “walked straight into me. ‘Get out of my way you racist piece of shit’ came his ever convivial salutation”, as the FIO butted the United fan and, after the intervention of two French police, proceeded to bounce up and down offering him “round the corner!”. Is this really acceptable behaviour from a member of GMP? Yet an official complaint about it made no difference whatsoever.

What of Roberts’ himself? He attempted to excuse the RI seizure by apportioning blame to the club. “The original complaint regarding that fanzine came from Manchester United” he told the FSF meeting, in stark contrast to an emailed assurance we’d had two weeks earlier from United Communications Dept: “I spoke to Mark Roberts (via email) … his reply was that it was spotted by his uniformed officers … He was categoric it had not originated from either club.” Yet Roberts still insisted, “They [MUFC] brought it to our attention and said they would prevent people from entering [with it].” We put this claim to United last week and they reiterated, “Categorically, it was not the club”. If so, then it means a public servant has lied whilst on official duty. Surely not!

At a time when police budget cuts are still to really bite, the Old Trafford gravy train rumbles on. ‘Watching football is not a crime’ shouts the FSF, but with all that recession-busting, morale-boosting overtime to be earned from the easy task of policing PL football, don’t expect Roberts et al to be listening.

Red Issue #259 is available from the usual places around the ground, priced at £2.50. To have it delivered to your door, subscribe now for 10 issues or the new issue alone. 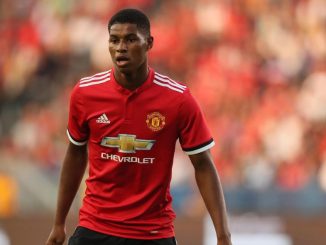 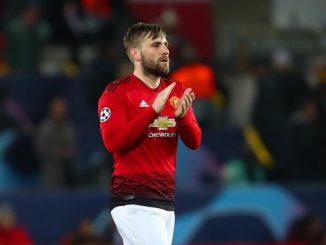 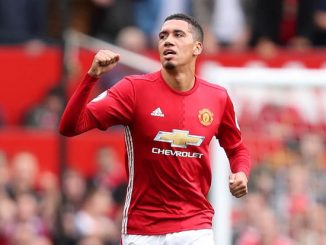 16 Comments on Red Issue and the GMP: Making up the law as they go along