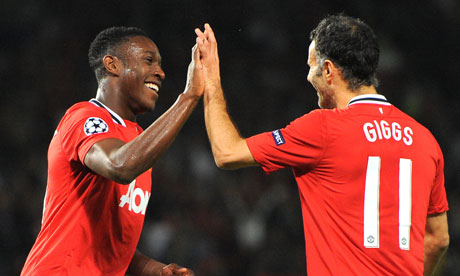 Manchester United let a two goal lead slip at home and had to make do with a draw against FC Basel. It had all started so well as Danny Welbeck got his first and then his second European goals – both set up by Ryan Giggs who was making his 750th start for the club. However, Basel who could have and should have scored in the first half came right back at United and aided by defensive errors from the home team, found themselves 3-2 ahead with just minutes remaining. Typical United though – a late goal saved the game.

Here we discuss the talking points of the 3-3 draw against Basel.

It’s all too easy (for Basel)

At least that’s how it felt and looked. United were in cruise control for 60 minutes despite allowing Basel chances to score. The fact that the players appeared to give off the impression of the game being too easy does not reflect well. There was an air of complacency and casualness about United’s play – whether it was the lethargy with which Anderson tracked back or consistent willingness of the back four to play their way out of trouble rather than just clear the ball.

Dropping points at Stoke should have been the wake-up call needed. This season’s mantra of ‘we’ll score one more than you’ had worked to date, but against Basel, United failed to take all their chances and simply afforded Basel too many. Basel must have wondered if they’d ever have a game as easy as that (relative to the team they were playing) – they missed countless chances and De Gea made a couple of good saves. United ensured it was too easy at times for Basel to slice them open. That said, Basel were excellent – the only way to play at Old Trafford is to attack United; sit back and you’re asking for trouble. Basel constantly committed men forward and ended up out-shooting United. Whether United deserved to lose more than Basel deserved to win depends who you support but neither side deserved the draw.

There is something of a first XI emerging in league games particularly in the midfield and up front. However at the back United have only fielded the same back four in consecutive games twice (against Spurs and then against Arsenal). Whilst the changes have to some extent been enforced with injuries to Vidic, Smalling, Evans, Ferdinand and Rafael, there needs to be some consistency. With Phil Jones, a new signing, having to pair up with various different players, it’s impossible for him to get any rhythm into his defensive game – similarly, it’s not easy for someone like Ferdinand to come in and play with someone new at the beginning.

The injuries have to be a concern now – Rafael, Vidic, Evans, Smalling and now Fabio are injured. Evra’s been taking plenty of whacks this season and Ferdinand is yet to prove his fitness over more than a few games lately. Stand-in defenders such as Valencia and Carrick are fine for the odd game but when they are suddenly having to start regularly in defence one has to worry.

Sir Alex has always been the master of squad rotation and keeping players happy – however right now United need to settle on an XI from front to back and barring injuries, stick with it. Too many players seem to know they’ll get a chance at some point and individual performances just were not up to scratch last night. It’s early in the season and players shouldn’t need resting – whilst the squad players may need minutes to keep them sharp, they’ll just have to bide their time for now.

Welbeck is back… and so is Carrick!

It was great to see Danny Welbeck make his comeback from injury, staying fit and healthy in the process. He looked lively and strong on the ball, with the added bonus of two well-taken goals in the process. Welbeck and Cleverley had been integral to United’s lightening quick start to the season, with the former linking so well with Rooney, invariably playing the deeper of the two forwards but also able to hit the box where necessary. The partnership of Rooney and Hernandez has been well documented, but Fergie will be delighted with the return of the young Mancunian who offers that extra pace and guile which perhaps Berbatov is unable to offer in certain games. Last night Welbeck worked tirelessly, dropping into midfield where required but also venturing into wide areas to link with Valencia and Young (and later Nani), the fluent interchange between the front players being the key to Fergie’s new approach in recent months (as discussed in our opening preview to the season here).

If it was good to see Welbeck back in action, but perhaps even better to see Carrick performing to something like his optimum once again. Since his return from injury Carrick has looked marginally off the pace, with many fans questioning whether this season may be the right time to phase him out of first team plans. However, last night Carrick performed admirably in the centre of the field despite the obvious shortcomings of the side per se, and particularly in the presence of a less than convincing Anderson who seems to have relapsed in the last 2-3 games after a promising start to the season. The debate will rage in the coming days as to whether Anderson is merely suffering a minor blip, or whether there is something more terminal with his displays (and indeed his long-term ambition to become the focal point of United’s midfield play), but last night the Brazilian’s sloppiness in possession was counteracted with Carrick’s prowess and simple efficiency and control of the central. Completing 76 of his 77 passes, Carrick was happy dictating the play from a deeper position in the first 60 minutes of the game; in fact it was he that broke up the play in the first half spreading the ball wide, which started the move that led to Welbeck’s opener. After quickly relinquishing the lead in the second half, Carrick drove his team forwards, again his metronomic passing enabling the wide players to influence the game; it was his quick ball out wide that led to Nani beating his man and sending over the perfect cross to Young, who headed home the equaliser in the dying minutes.

Fergie will be annoyed that his team has been somewhat tactically out-manoeuvred in consecutive games to both Stoke and Basel respectively, and will be particularly aggrieved at his team’s timidity – both times pressed back deep into their own half. Last night’s performance was almost a replica of the game at the Britannia, with the forwards causing United’s defence all sorts of problems aerially, and one dropping into the midfield in order to create a 3 v 2 scenario at times. Cynics will point towards the fact that United have been lucky at times this season despite their attacking verve, with the end to end Chelsea game closer than the 3-1 scoreline suggested; the 8-2 demolition of Arsenal against a side with 7 regulars missing from the starting lineup; and conceding the most shots from open play in the entire domestic league. The team’s performance last night however was once again not aided by selection (see Talking Points vs Stoke), with a severe lack of balance throughout the side. Each member of the back four were too committed going forwards, and over-ambitious on the ball (especially Fabio and Evra, who were often caught high up the pitch leaving a massive chasm between Jones and Ferdinand on the counter); Anderson and Valencia unable to make inroads into midfield, and perform the basics correctly; and Giggs extremely lax in possession in the final third (crucially giving it away just before Basel’s swift counter-attack and finish to get the score back to 2-1). Park’s early introduction in the second half thus came as no surprise and United seemed to regain an essence of control. So whilst it is not all doom and gloom – the latter two games were always going to be tough tests, and the opening 6 games of the season have elicited high expectations and with those, a false sense of security – Ferguson will nonetheless be working tirelessly with his coaching staff to ensure that his team is back on the straight and narrow, defending with greater concentration, passing with greater accuracy and being more clinical in and around the penalty area. Oh and the return of Rooney might help too.

Fresh competition from Ashley Young has only spurred Nani on. He’s become mature, less selfish and a dangerous footballer. He was brought on late against Basel but even that was enough time for him to make an impression – this time with his crossing (something that until recently has never been overly consistent). His assist for Young’s goal was a fantastic pacey cross and he put others in too that could have been converted. United must make the most of him now – he’s providing the flair and creativity that arguably the central area lacks.

With all due respect to Basel, that was a game no United fan would have expected not to win. However, the Swiss side were determined to attack and met a sloppy United side laced with complacency. Danny Welbeck’s first European goals were a big plus as was the performance of Michael Carrick, however a response will be needed against Norwich at the weekend – a convincing win where the opposition are not gifted so many chances. As far as the Champions League goes, United are 3rd in their group and have a double header against FC Otelul Galati next – six points are required and then the group can still be won.