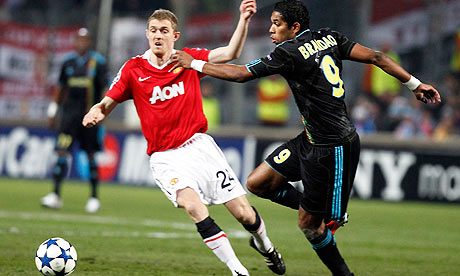 Manchester United drew 0-0 away from home in Marseille tonight, with neither side really threatening the opposing keeper. United had the better of the first half, with Marseille the better of the second. Sir Alex Ferguson opted to start with Darron Gibson, ahead of Paul Scholes, in a three man midfield alongside the deep lying Michael Carrick with Darren Fletcher pushing on. Rooney started wide left, but drifted in throughout the match, whilst Nani operated on the right hand side. Below we discuss the talking point and urge you to get involved in the debate.

Monaco all over again?

At the time it felt like a great ‘Italian style’ result. United had traveled to the south of France and got a 0-0 in the Stade Louis ll stadium with French Champions Monaco. Sir Alex Ferguson, not a knight of the realm at this point, would have been pleased with the scoreless draw away from home against a side that included former African footballer of the year Victor Ikpeba, Scotland’s captain John Collins, future United keeper Fabien Barthez and a young Thiery Henry. However, the game at Old Trafford finished 1-1 and United were eliminated on the away goals rule, something that has been a little too familiar to United elimination over the years. David Trezeguet thunderbolt past Raymond van der Gouw gave Monaco the lead before Solskjaer equalized, however United couldn’t find a second and were eliminated in the last eight.

That result is thirteen years ago next month and Ferguson will be very aware that United need to start strongly at Old Trafford when Marseille visit Manchester on 15th March. United are a much more experienced outlet than in 1997/98 and I fully expect qualification. United have only dropped two points in the league at home this season (against West Brom), whereas in 1997/98 we dropped seven points. Once concern is the games in between fixtures. United travel to Wigan Saturday, then to the rearranged fixture against Chelsea at Stamford Bridge on Tuesday, to Anfield the following Sunday and then an FA Cup tie against Arsenal or Leyton Orient. That is four big games in twenty days before the second leg, with three of those fixtures away from home.

United were on course to qualify for the semi-finals and on course for a third Premier League title in three years prior to the tie against Monaco. After elimination to the French Champions, United also fell behind Arsenal – who went on to claim their first title since 1991 – beating United on the Saturday before the 2nd leg. United have five massive games coming up that could really shape the season. I do believe United will qualify for the next round, however will a result against Marseille be possible if many players are fatigued from playing so many games in such a short space of time? United have injury worries, with Anderson, Park and Giggs out – whilst Antonio Valencia will need a few games to get his match fitness back after being out for so long. Big, big games coming up – lets hope this squad is big enough to cope with them.

I’ve always defended Michael Carrick, and will probably continue to do so, when some Reds have had a pop at him for not shifting the ball quick enough and playing too many backwards and sidewards passes. Tonight, Carrick only completed four forward passes, compared to nine backwards and seventeen square. Carrick’s biggest strength is how he uses the ball, his composure and ability to retain the ball. As the deepest of the midfield trio, Carrick often found himself with space and time to pick a pass, but anything that went forward was either intercepted or mislaid.

I always try and give credit where it is due, however I thought that Carrick was well below par tonight and was very costly in possession. Overall, Carrick was the most tidy United midfielder with a pass completion rate of 83%, however Gibson completed ten forward passes (out of 15), Fletcher completed six (out of 11) and Paul Scholes completed three forward passes – one less than Carrick having come on with eighteen minutes to go.

There is no doubt that our midfield tonight lacked its usual urgency throughout. Carrick was poor throughout, Fletcher was wasteful in possession but did what he does best and close down quickly and press high up the pitch whilst Darron Gibson actually had one of his better games for United. Out talking points post against Southampton a couple of weeks back looked at Darron Gibson and his potential future with United.

Yet again the Irishman failed to complete 90 minutes (has only done once this season against Crawley Town) as he was withdrawn on the 72nd minute for Paul Scholes. I still do not think Gibson has the quality to be a United regular, however credit should be given to him when he puts in a decent performance – i’m talking more so about the first half.

Once again when looking for positives in a game attention turns to Chris Smalling. This was his 20th appearance of the season and just his 39th as a professional footballer. His maturity since moving to United is really not what one would associate with a 21 year old centre back. He was brought in tonight due to injuries to Ferdinand and Evans and never looked flustered in the intimidating atmosphere at the Stade Velodrome. This was in fact his 6th Champions League appearance of the season, but by far the most important – the only game he’s not featured in was Valencia away: Alongside Vidic, Smalling looked easy on the ball, confident enough to run it out of defence just like Rio does. He was dominant in the air and despite being caught out on a couple of occasions by his positioning he generally coped with any threat posed when the ball was on the ground too. These diagrams highlight how successful Smalling was today in a defensive capacity: Blocks made by Smalling Clearances made by Smalling Interceptions made by Smalling

It’s worth noting though that Smalling was part of a solid defence that only allowed six rather tame efforts to be had on target by Marseille. Such was United’s ability to keep Marseille at bay, that the home team only enjoyed 39% of the possession – from a United point of view, not making their share of it count was frustrating.

United earned a draw in an uneventful match against a side that should not be too much of a threat at Old Trafford, although with the inlclusion of Gignac and a fit Valbuena could well add a little more sparkle to their attack. United will have to improve in the centre of the park and on tonight’s evidence, Paul Scholes’ inclusion is a must for his guile and craft. Fletcher has had some criticism this season for his performances, however you know with Fletcher that you will always get a high work rate and his presence will hurry Marseille to play.

Rooney did well in his left sided role, often drifting inside to try and influence play, although both he and Berbatov got little service to work with. Nani was a frustrating figure, often going to ground too easy, whilst giving away freekicks after losing the ball. He is an exceptional talent and has been one of United’s top performers this season – however, he this wasn’t one of his better games.

United travel to the JJB stadium on Saturday to face Wigan Athletic. Last season, United ran out 5-0 winners – with Michael Owen scoring his first goal for the club.

The statistical analysis and modified graphs used in this post were extracted from the excellent Total Football app.