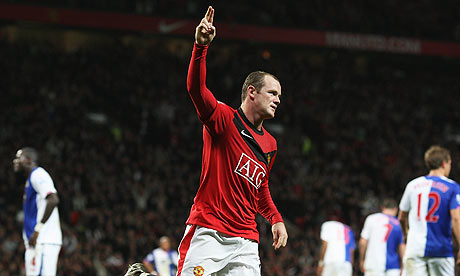 United still remain unbeaten in all competitions this season. Blackburn Rovers come to Old Trafford in a game that feels like it has added importance. United players, staff and fans still look back at the away game at Ewood Park last year where vital points were dropped. Whilst Old Trafford has been a stable enough fortress in recent times, every game must be treated with genuine magnitude, no longer does the Premier League offer a straightforward match, three points are vital.

Blackburn are a team in up-and-down form. They sit comfortably in 11th in that poistion where a win could take them within touching distance of a European place but at the same time a loss could mean that a relegation spot is all too close. Three wins in their last four games suggests some kind of short-term form – Blackburn picked up as many points in those games as they did in their previous ten!

One can comfortably predict the type of football a Sam Allardyce team will play (even if the new owners have hinted they want wins with ‘style’). A combination of tough tackling, physicality and the odd long ball will be the challenge facing United tomorrow. It may not be pretty but it’s a proven formula for Premier League survival and a mid(ish) table position. Mame Diouf on loan from United will be unavailable for selection but in David Dunn they have a very clever midfielder who unlike the style his team play in, can still unlock a team with some intricate passing. Alongside him in midfield Blackburn have Morten Gamst Pedersen whose left foot has rediscovered its scoring touch; and the young but talented Steven N’Zonzi. Blackburn’s real strength may well be at the back. Nelson and Samba are imposing and experienced, but behind them is Paul Robinson. Once a teenage prodigy, once a scapegoat, he’s quietly got himself back into form and is once again playing to a very good level. The experience that runs through the Blackburn team will be important at Old Trafford in making sure the younger players keep their shape and discipline.

Blackburn, as one of the founding members of the football league, have been around for a long time meaning that this fixture has some history. Whilst Blackburn were one of the first teams to win the Premier League they have been relegated during the modern era. Even so this is a regular fixture with which United have had a lot of success. Their last win at Old Trafford came in 2005/06, more recent than most teams can boast. However the past four years have seen Blackburn go home with 0 points, just 2 goals scored and 10 goals conceded. Last year a goal each for Rooney and Berbatov sank a battling Blackburn performance.

Key players – Emerton, Givet, N’Zonzi and Pedersen – will all have their fitness assessed pre-match. All are not guaranteed to make the game. Young Phil Jones in centre midfield (even though the player is primarily a centre back) will no doubt be looking to impress as his is a name that has been linked with United in the not too distant past. With European qualification assured Ferguson can focus full attention on the league. The mid-week game against Rangers all Ferguson to rest his first choice back four. Therefore Rafael, Ferdinand, Vidic and Evra will (should) all return for this game. The Carling Cup match in a few days will once again allow for rotation so theirs no excuse for not going with the strongest team available tomorrow.

United have some injury doubts in the centre of midfield for this game. Fletcher is out with an ankle injury and isn’t expected back until the games against Arsenal and Chelsea. Scholes has a slight groin strain and may not make this game, I wouldn’t expect him to be risked. Hargreaves remains unavailable. This leaves the in-form Carrick to be partnered by either the returning Anderson or Giggs. Park would also be an option but I expect him to return on the wing. I think Anderson will be the one to start. Giggs played a full 90 minutes at Rangers and even though Anderson starting may make him an unlikely starters at West Ham in the Carling Cup, the league has to be prioritised.

Off the back of a goal and an apology Wayne Rooney is expected to continue up front. The nature in which he celebrated against Rangers won’t have ‘fooled’ some fans but the genuine joy on his face will go a long way to reminding some people that he probably does care. Certainly the noises Rooney has been making this past week have all been positive and are the kind of things the fans want to hear. Berbatov still is yet to score since the 19th September but Ferguson will be keen for him to be given a chance to rectify that having dropping him for the Wigan match last week. This might be harsh on Chicharito who seemingly has done little wrong and lots right since joining but his time will come.

United go into this game as still the only unbeaten side in the country. The wins against Wigan and Rangers were a welcome return after the two draws prior. As I somewhat bizarrely predicted on Twitter two weeks ago, last weekend was very much a Manchester coloured Red weekend. Chelsea and Arsenal will not drop points all that often so United must keep up the pressure and hope that should either slip up, first place will be United’s outright. Should Giggs feature against Blackburn he’ll need just 10 more league appearances to equal Sir Bobby Charlton’s record of 606 league appearances for United. Rio Ferdinand will be looking to continue his run of playing more minutes than any other outfield player this season without a booking (720mins).

Before I sign off, here is the Stretford-End.com betting info for anything Blackburn related: