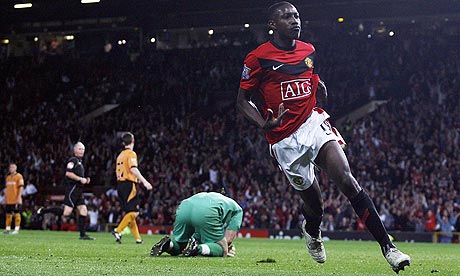 United’s defence of the Carling Cup continues with a home tie against Wolves in the fourth round. United are expected to name an entirely different starting XI to the team that finally won away from home at Stoke on Sunday. Wolves have had to beat Southend and Notts County to get this far so will expect a far tougher test at Old Trafford on Tuesday.

Mick McCarthy brings his team to Manchester in poor form. They sit 19th in the Premier League and are level on points with Liverpool (above them) and West Ham (below them). Their two Carling Cup wins have both come in extra time against lower league opposition; they also make up two thirds of victories achieved this season by The Wanderers. Against Premier League opposition their only victory came on the opening day of the season against Stoke.

Most recently, in October, Wolves have lost away at Chelsea, drawn at home to West Ham and lost away at Wigan. Their trip to Old Trafford couldn’t be worse timed.

Against United last year in the league, Wolves selected a side with 10 changes to their outfield personnel from a team that had beaten Spurs 4 days earlier. They were later given a £25k suspended fine by the FA for fielding a weakened team. I wouldn’t be surprised to see Wolves again weaken their team for this game. Their next three fixtures in the league are against Man City, Man United and Arsenal – and whilst maybe 0 points are expected from those three games, they may take priority over the Carling Cup. Alternatively, McCarthy may go for a morale boosting result at Old Trafford with a strong side in order to lead his team into their tough three league fixtures.

Starts are likely for Hennessey, Milijas and Elokobi. Alongside them Stephen Hunt may win a chance to continue his recovery from a long term injury and Ebanks-Blake should get an opportunity to feature on his return to Old Trafford. One unfamiliar name who is an outsider for a start is 19 year old David Davis – the young midfielder made the bench at Chelsea on Saturday and could make his Wolves debut tomorrow night.

Wolves in the league cup at Old Trafford is hardly a new affair. Last year this was the draw for the third round tie. United won it 1-0 with a well taken Welbeck goal after Fabio was sent off. The omens are not good for Wolves, it’s 15 years since progress beyond the fourth round and 30 years since a win at Old Trafford. By contrast, United are unbeaten in this competition since September 2007. Ive predicted a wholesale 11 changes from the team that won at Stoke only two days before this game. With Kuszczak on home game duty in the Champions Leauge, Ben Amos will have a chance to add to his one appearance against ‘boro in this competition two years ago. He would’ve played at Scunthorpe but needed a minor arm operation.

The back four is totally dependent upon who’s fit. At the time of writing I’m unsure if Evans or Fabio are fit to play. I think of the two Evans is unlikely to be ready and so I’ve opted for the da Silvas in the full back positions. Wes Brown has been out of the scene for a little while so I think he may partner Smalling in the heart of the defence. There is a case for Gary Neville to start after his time on the pitch was cut short against Stoke at the weekend.

Unfortunately I don’t think the midfield will feature any of our promising reserves or academy players. Obertan you’d think is a certainty along with Gibson, Anderson and Park – none of whom featured on Sunday. With Chicharito and Berbatov playing a full game only 48 hours earlier, Macheda and Owen should come in for them up front.

The bench will be the interesting area of our squad selection. Many of the young players at the club have impressed in the early parts of this season. Certainly the captain of the reserves, Magnus Eikrem is surely pushing for a start as is new signing, Bebe. Other players that may well feature on the bench are William Keane, John Cofie, Paul Pogba, Cameron Stewart and the ridiculously exciting Ravel Morrison.

And what of Owen Hargreaves? Last we heard he had a minor calf injury…could Sir Alex spring a surprise and include him?

United should head into this game full of optimism. The Carling Cup has been good to the club in recent years and offered a great opportunity for success. The result at Stoke will hopefully galvanise the players and start a good run of wins that we can take into the game against Spurs at the weekend.

I’m going to predict a 3-1 United win, although I should add my predictions have generally been quite off so far this season!!