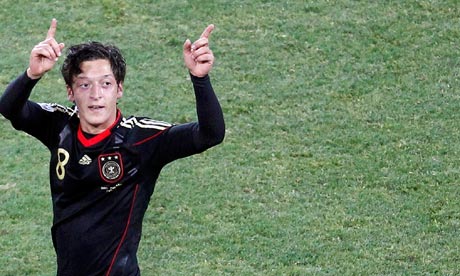 For the regular readers of the blog you will be well aware that I am a realist, rather than a fantasist who loses himself in endless transfer possibilities. When I was younger, maybe I thought “Could we sign a Roberto Baggio or a Marco Van Basten?” – which at the time was ludicrous, considering the attraction of Italy – however, with Manchester City signing David Silva and David Villa moving to Barcelona before the World Cup, surely there is potential to add to this already impressive squad so that United can challenge both domestically and on a European front?

Mesut Ozil was extremely impressive as a trequartista for Germany this summer, operating intelligently behind Miroslav Klose and playing a major part in England’s elimination. I, along with a number of other Reds, think that Ozil’s talent and intelligence would be a much needed addition to a squad who are still relying on the aging legs of Giggs and Scholes. So my question is – if Ozil moves to Chelsea or Real Madrid for the reported £12million that some sources are quoting, can Fergie still state that there is no value for money?

I am in no position to question the managerial capabilities of Sir Alex Ferguson. He is shrewd enough in the transfer market to know the quality of a player and has previously purchased a number of quality footballers that were significantly undervalued. The fact is that Manchester United do not have money to spend on players like Ozil, Wesley Sneijder or Mario Balotelli. Again, we were once linked to Zidane at Bordeaux, Batistuta at Fiorentina and Luis Figo then at Sporting Lisbon – with all three players moving elsewhere. I am a realist. However, for £12million would you not consider that value for money? Even if it was £20million – for a player that could make that difference in a tight European match against a deep lying defense – wouldn’t that be worth it?

Fergie was quoted as saying:

“I cannot speak about other clubs. We are comfortable with the squad we have got. We bought players at the right time of the season and we are happy with what we have.”

Although United have purchased Chris Smalling for £10million from Fulham and young Mexican striker Javier Hernandez, a third addition in the form of a creative outlet would be welcomed. Can United still challenge both domestically and on a European front? Of course – we have a quality squad, the best manager and a desire to win. The problem is when have United ever looked for ‘sell on’ value before? The philosophy of ‘how can we make as much money out of this asset’? Hernandez looks a great prospect but the cynical side of me thinks that if he is a success – United will no doubt sell him on for a hefty profit. If we approach transfers this way, we will never sign players of Ozil’s quality. Ok, we don’t know the ins and outs of the transfer dealings – even if some of us believe we are mini agents! However, say Ozil did move to another club for a fee between £12million and £20million – would it concern you? Do you think we need him? Would the clubs lack of ambition in the transfer market anger you? Or should I just sit back, forget reality and look to the future?

26 Comments on Surely Mesut Ozil is value for money Fergie?