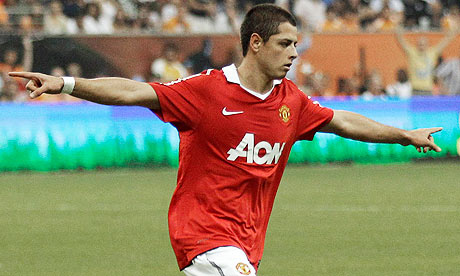 Sir Alex Ferguson has praised our new signing, who has made quite an impact since signing from Chivas, Javier Hernandez who has scored in two United games so far – both for and against his new team mates. Ferguson went onto describe the Mexican International as ‘first class’ and believed that he could operate as a lone striker in a 4-3-3 formation in European football next season – which could then see Wayne Rooney return to a wide role as he did many times when Cristiano Ronaldo occupied a more attacking berth. Hernandez scored a superb lob against MLS all stars and found the back of the net against United last night for his old club Chivas.

Sir Alex was full of praise for his new striker in the post match interview whilst also speaking positively of the pressing qualities of the Mexican side:

“Chicharito was first class. His goal for Chivas was a marvellous strike. He showed his real qualities. Chivas played very well and they were very quick. They pressed the ball well and made things difficult for us. They deserved to win. As for us, we’ve been away for three weeks. We’ve done lots of travelling and I think the players need to go home and rest now.”

“It was always my intention to give him only 15 minutes of the second half as he is in the process of recovering from the World Cup. He will now do some fitness training and endurance work when he arrives in Manchester and he will play more games.”

Lastly, the gaffer gave Hernandez an enormous compliment when he compared him to the legendary Ole Gunnar Solskjaer and believes he can fit into our 4-3-3 formation with ease:

“Chicharito has done really well. The players have all remarked how good he is and what a great finisher he is – I think there are similarities between him and Ole Gunnar Solskjaer. The players are all supportive of him and have welcomed him to the club. I think he has a great future with us. The 4-3-3 formation suits us in some games, particularly in Europe because it’s important to guard against the counter-attack and keep possession. I think Chicharito can play as a lone striker, there’s no question about that. He did it in the World Cup for Mexico. But there are big possibilities of a partnership with Wayne Rooney and other players.”