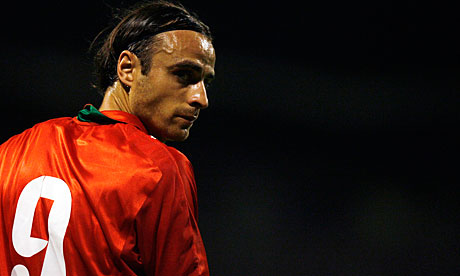 Manchester United’s number nine has decided to call it a day on his International career aged just 29.  Berbatov, who found the net 12 times in 33 Premier League apperances for United this season, is Bulgaria’s all time top goalscorer with 48 goals in 77 appearances and won his first cap back in 1999 against Greece.  Some would consider his performances this season a little disappointing, despite generally scoring when he started a match and contributing a number of goals to a goals tally that surpassed last season’s total.  There are many rumours linking Dimitar Berbatov with a move away from Old Trafford, especially considering that Ferguson doesn’t believe the Bulgarian can play in a 4-3-3 formation with Wayne Rooney.

Berbatov, who signed for United in September 2008 for a record £30Million fee from Tottenham Hotspur, released the following statement today:

“I came to the decision that as of now I have retired from the national team. It wasn’t a decision I took lightly and I have reconsidered several times. Everything has a beginning and an end and that is today.”

The skillful front man also revealed that the news may come of shock to manager Sir Alex Ferguson, who wasn’t consulted regarding the decision:

“It was a difficult decision but sometimes we have to take difficult decisions. I feel exhausted and now there are many guys who can emerge from my shadow. For them the moment has come. You should always know when to stop. I haven’t discussed it with my club team. I guess it will come out in England and Sir Alex [Ferguson] will call me.”

United legend and former striker Denis Law doesn’t believe Berbatov has hit the standards he set at Tottenham; and cites the casual laid back approach as the main reason for the criticism he receives:

“I don’t want to knock him. He hasn’t come up to the standard he set at Spurs, but when he was there he looked an extremely good player. He’s always had that laid-back style, even when he was at Tottenham, and that’s what the fans admired him for but now he gets criticised for it.”

2 Comments on Dimitar Berbatov retires from Bulgaria national side