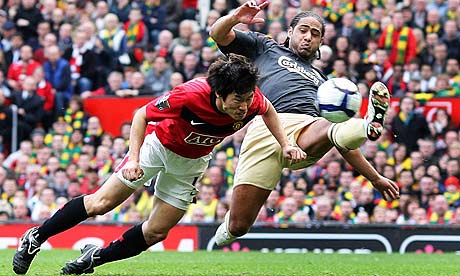 Ji-Sung Park underlined his ever growing importance to the cause and once again justified his manager’s decision to include him on the big occasion as he scored the winner that sent Manchester United back to the top of the Premier League in an unenterprising encounter with Liverpool.

The first half was predictably high on tension and tenacity – both clubs respective league ambitions were supported by the subplot of this being Liverpool’s chance to actively dent United’s title aspirations.

The pre-match talk was, predictably, dominated by the Torres/Vidic debate. Would the Serb recover the form that saw him comfortably deal with Torres in their earlier meetings or would the striker be able to outfox both Vidic and his partner Ferdinand? As it turned out, neither would be around to deal with him as he gave Liverpool an early lead with a totally unmarked headed attempt. Michael Carrick had dallied on the ball in just the 5th minute, Torres snatched it and fed it to Steven Gerrard. Dirk Kuyt received the midfielders ball on the right hand side and his cross was nodded home by Torres.

Liverpool’s early confidence was matched by an apparent nervousness from the home side, but fortunately a response was rapid. Wayne Rooney fired a shot wide from 20 yards, before Antonio Valencia cut inside and made a run for goal. Javier Mascherano had a hold of Valencia during the run and the Ecuadorian made full advantage of the illegal contact by going down under the contact just as he entered the penalty. The foul was clear; there may well be a grey area over whether it should have been a penalty or a free kick. Nonetheless, Wayne Rooney stepped up to take the kick – it was brilliantly saved by Reina but the keeper palmed it back into the path of the relieved forward and Rooney made no mistake second time around. Rooney was unhappy with Fernando Torres’ deliberate scuffing of the penalty spot, but the Liverpool player went unpunished.

Scores level and then the first half became very much a war of attrition – Liverpool offering little going forward, and aside from a Nani effort that was saved and a couple of Park headers, so were United. After Torres had finally been booked for a swipe at Park, Carragher too saw yellow in first half injury time after bringing down two players following an advantage played by Howard Webb. With the last kick of the half, Rooney’s free kick was dealt with comfortably by Reina.

For all his flaws and for all the criticism Rafa Benitez gets from United fans, there is one thing that can’t be denied, and that is his general ability to be an effective cup tie manager. That “any result but a loss” mentality was clearly into play in the game as it was clear that the Liverpool players were identifying the chance of damaging United’s championship aspirations as just as attractive an outcome as helping their own flagging Champions League qualification hopes. The mentality made for a similar second half and it quickly became evident that to open the game up United would have to score.

The result was another half with chances scarce; Rooney’s ball to Park in the 51st minute saw the South Korean with some space but still too much work to do – his shot from 20 yards was never likely to trouble Reina. Park was not to be denied and it was very much a case of cometh the hour, cometh the man.

Sir Alex was preparing to bring Ryan Giggs into the game after his recent injury lay off; either for Park or the awful Michael Carrick, but those plans were shelved as the Red Devils took a deserved lead (if only because of their attitude in trying to win the game). As usual, United had regularly tried to utilise the pace of Valencia wide right, and even though it worked in as much as giving Liverpool a constant menace, it was a little variety that provided the breakthrough. This time Rooney dropped deep and Valencia went into the middle – Rooney played the ball wide to Fletcher who had time on the edge of the box. Gary Neville then raced forward to give Insua the dummy run to concentrate on, providing Fletcher with enough time to cross the ball. Park was in the right place at the right time, performing the diving header to give United a vital lead.

The visitors almost hit back immediately but Ferdinand was on hand to easily deal with the ball when Torres’ control was poor.

Benitez’s changes were gradual as he introduced Aquilani, Babel and Benayoun, but as United responded by bringing Scholes and Giggs on for an experienced influence, Liverpool never looked likely to really threaten. A scuffle between Kuyt and Fletcher and the customary yellow for Vidic for a challenge on Torres were enough to keep the atmosphere bubbling and as a result of the game being opened up Rooney almost extended the advantage when he bamboozled Agger but probably chose the wrong side of the goal to place his shot. Liverpool fashioned an unlikely chance in the 90th minute when Gerrard found Torres, but the forward’s miserable afternoon was complete when he horribly miscued and Benayoun’s effort in straining to reach the miskick was easily dealt with by van der Sar. It was barely an effort on goal worth the mention but the fact that it was their only opportunity that tested van der Sar after the 5th minute opener said much about both the performance and desire to take the game from United’s great rivals.

Ferdinand and Vidic will have every reason to believe their reputation has been fully restored after neither was at fault for the goal and both dealt with Torres more than comfortably. Nani and Valencia continue to impress while the non-stop engine of Fletcher and Park did on this occasion manage to compensate for the non-stop carelessness of Carrick. The difference between the sides could be indirectly traced to the performances of their respective spearheads; in the second half, Rooney’s craft and determination was brilliant, while Torres general body language screamed of someone petulant and disinterested.

The performance wasn’t pretty but it was a good example of how to play against a team who only care about making sure United don’t win rather than their own ambitions; given that City rank among their opponents in the run-in, this could prove to be a valuable exercise.