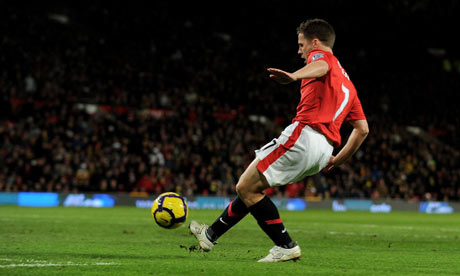 Michael Owen’s injury nightmare continues as Sir Alex Ferguson revealed that he believes United’s number seven will be out for few weeks. Michael Owen started the League Cup final against Aston Villa on Sunday and scored the opening goal to help United to a 2-1 victory. Owen pulled up half way through the first half to be replaced by Wayne Rooney, who scored the winner in the second half. Ferguson stated that both Owen and Rafael will go for scans on the injuries they sustained in the match.

Michael Owen is United’s top scorer in the Champions League so far this season, and has netted three times in the Premier League so far, including the vital winner against Manchester City in September. Sir Alex Ferguson was quoted as saying:

“He’s not had a lot of football and the pitch probably wasn’t the best for him. You pick the team before you know the pitch conditions, and Michael isn’t suited to a heavy pitch like that. We paid the penalty for it. That aside, I thought he was one of our best performers in the first half. He did really well for us and scored a goal to get us back in the game. He’s good at picking up crumbs. He’s as good as anybody at that. He and Rafael will go for scans tomorrow, I think Michael will be out for a few weeks.”

Owen’s performance will delight a number of United fans who were frustrated at the players lack of playing time since signing in the summer on a free transfer from Newcastle United. Owen also confirms that he should be out for a few weeks but is pleased with the victory over Villa:

“It has been a great weekend for us, with Chelsea not getting a great result and us winning here. We are all really happy at the minute. I am disappointed because I am going to be out for a few weeks, but once I get back it will hopefully be for some important games.”

2 Comments on Ferguson: Michael Owen will be out for a few weeks