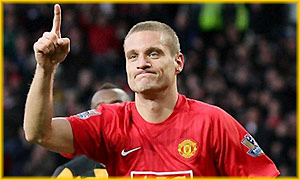 Nemanja Vidic’s first goal of the season, at 4-1, turned out to be the winner in a captivating match where surprise package Hull City threatened to provide a massive upset.

Premiership Champions United were rocked by Hull’s never say die attitude but managed to hold on for all three points. It was a contest of the home side flexing their exquisite skill, and the away side proving themselves to be every bit the Bolton 2003 re-incarnation. Individual performances from the likes of Anderson and Carrick were totally pleasing on the eye, though the sheer industry of the visitors meant they were always in with a shout.

Cristiano Ronaldo opened the scoring after just 3 minutes when his shot went in off the left hand post – and was greeted with a rapturous refrain of “Viva Ronaldo”. Daniel Cousin equalised for Hull with a goal almost identical to his winner at the Emirates – but just a couple of minutes later, Carrick had restored Uniteds lead.

Wayne Rooney was by and large wasteful in possession as his endeavour to score his 100th career goal weighed heavily, but he did superbly create an opening for Berbatov, who fed Carrick, who slotted in via the post. And with a minute to go until half time, Ronaldo made it three goals via the woodwork, as he was helped by the underside of the crossbar when heading a corner.

Rooney assisted Vidic’s half volley around the hour that seemed to settle the occasion – but Hull were totally game and pulled back. It was unlikely figure and ex-Wanderer Bernard Mendy who was the key man in the last half hour, first lobbing van der Sar to score – JUST – then being, arguably, brought down in the area by Rio Ferdinand. Geovanni scored with just 8 minutes to go, ensuring a tight finish.

The Red Devils were totally profligate in front of goal and it made for an entertaining fixture which could just as easily have ended up as 10-4. Fortunately for Sir Alex, the defensive frailties were not exposed to a costly extent, though with Celtic and Arsenal in back to back colossal away games next up, he will be hopeful they were all shook out against the Terriers.

View all of the goals from today’s game in the forum and also the Manchester United lineup against Hull City.